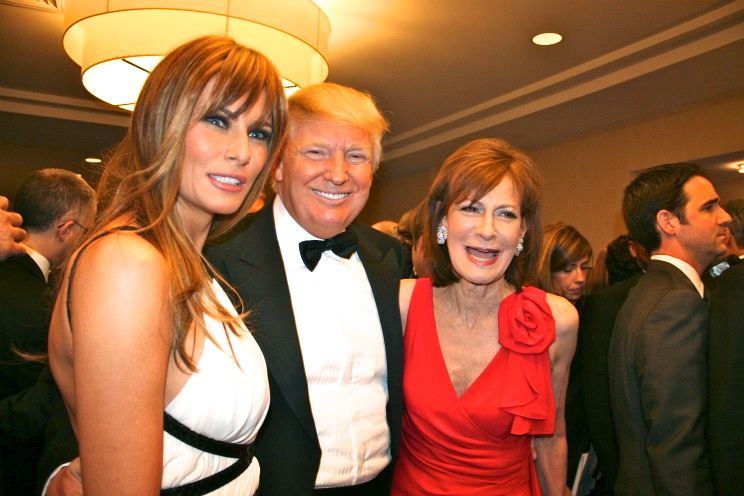 Hello, Lally Weymouth. By herself and with Figurehead Donald Trump and his wife Melania in 2011. Old friends.

This is fucking obscene pic.twitter.com/htOBro0STb

Last Saturday, the divided and distracted people of this nation had officially become a sideshow when this event happened in Southhampton, Long Island, N.Y.

On that day, this country had become another interdimensional colony from another realm when this party collective of widely diverse supposed ideological differences optically feuding with each other came together for the hostesses pre-birthday and upcoming movie release party of an upcoming potentially Oscar regaled Steven Spielberg film.

It's almost like there's a ruling class that transcends feigned partisan acrimony. https://t.co/h8xIEZZSSc

In these times of utter confusion, cynicism and abject cruelty among the citizenry, earlier revered by the inaugurated Trump as you, the people, this party cannot be more untimely, tone-deaf, insensitive and offensive. The Washington Post has been railing against the antics and widespread corrupt connections of Figurehead Trump for the past year and a half with such zeal that that at times most of their reports had to be corrected for missing major facts, contributing to Trump’s and the public’s disdain and his own desired physical abolishment for the proclaimed fake news medium. With this shindig, it’s clear to people why that may be and it should be clear now that Trump’s ongoing social media spats is just the same distracting fodder that he used to provide the WWE with in his time as a pro wrestler feuding with the Small Business Commissioner Linda McMahon’s husband.

This party, although obviously not the first of it’s kind if you just go on any digital search engine for images of our money betters soirees, is the 10th circle of hell manifested. This happening is veritable proof that life as we know it in it’s current form is a joke and a lie if you don’t have obscene amounts of wealth, whether earned or inherited (mostly the latter). These lavish party people don’t give a goddamn, a shit, a fuck or a flying fuck about the concerns and problems of the middle class and the working poor that they feign (with now underlying mockery and contempt) to represent and inform. As George Carlin once proclaimed and prophesied just a few short years before his way to soon death, “it’s a big club, and you ain’t in it”. A quote which may now have to be inscribed in the nation’s constitution.

This party makes Marie Antoinette’s notorious and dismissive words to the suffering proles in 18th century France sound like a charitable suggestion for single payer health care and affordable housing and free college for all. This event happened despite the acrimony and polarization going on in the streets and the justified fury of the people confronting their elected representatives at town halls.

This blatant display of apolitical crapulence comes on the heels of the recent shooting of Republican elected officials at a field during a baseball practice. Is this party what was meant about the bipartisan unity demanded by all those effected by that day of terror and by Figurehead Trump. And wouldn’t this party trigger and inspire another disgruntled mentally ill citizen to consider this a proper target for his or her sense of immediate vigilante justice?

Mostly, this party put together by a major publisher of journalism, by one of the giants of the fourth estate, flies in the faces and insults the intelligence of the public and the right to be informed. And solidifies the rotten state of class division and widening wealth disparity overwhelming towns and cities as public services are being denied them to enrich people like Ms. Weymouth and her wealthy sociopath guests with generous tax cuts.

Certainly, they all had a good time and will continue to do so, even as it comes at the expense of the people’s growing fears and the concept of reality. Unless something happens to make people like Lally think twice about her next gathering of uber-equals. Say a revolution. With that prospect, it’s more likely she will hire military contractors to fortify her next one.