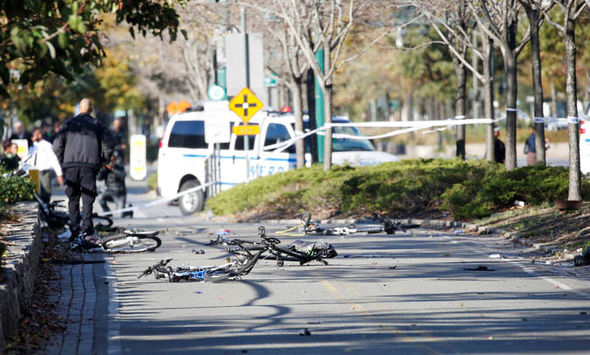 At 3 in the afternoon, a man heading south on West St. drove into the bike path entrance at W. Houston St., accelerated and hit bicycle riders and pedestrians on a mile long isolated path until he crashed into a school bus at Chambers St. He jumped out of his vehicle armed with a paintball gun and a pistol into the middle of the road into incoming traffic, made some errant shots, proclaimed “Allah Akbar”, was surrounded by police and was shot by an officer and arrested.

Eight people were killed and eleven injured from the monstrous attack. The killer was an American Citizen from Uzbekistan who lived with his parents in New Jersey. He worked recently for Uber.

Two hours later, a press conference was held by the NYPD Commissioner O’Neil, Mayor de Blasio, and Governor Cuomo to declare this was a terrorist attack and advised the public to remain vigilant, live life and not to be deterred by the Isis inspired act of senseless and lethal violence.

After dispensing this advice, the city decided to let the Halloween Parade continue. Despite the vulnerability of the citizenry including the NYPD, being that thousands of people participating in the march and penned in on the sidewalk by barricades, and the decision to deploy more police at the yearly event.

The rationale to let the parade go on is supposedly to not let terrorism overcome our freedoms. But the general reaction to this attack in the middle of the day was perplexing. When recent and similar terrorist attacks happened in other nations, including suicide bombs, the city makes a diligent, at times excessive, order to ramp up militarized police presence no matter if there is a viable threat. This slaughter occurred just 5 blocks west from where the parade started. Our officials didn’t even had any further information about any threats but they did not even consider the potential of someone else getting into a truck and plowing through a police barricade into other points of the parade, which ends at 23rd st, or even if some other fiend would set off a bomb on the spectator crowd like what happened at the Boston Marathon five years ago.

Why the hell would the Mayor and Police Chief of the city and the Governor of the state would not cancel the parade after this is just outrageous. And irresponsible and insane.

The trains were still running. Not on time as per habit, being the worst fucking transit system in the universe, but just normal as usual. Not what you would expect if a terrorist attack hit the city though, figuring that the platforms would be crowded with people trying to flee the area.

Getting home turning on the T.V. was a sight to behold. Game 6 of the World Series was about to come on. It had the pregame show and David Ortiz started running his mouth with some shitty analysis on the teams being fed through his giant white earpiece, as if he was broadcasting the game from the United Nations. Finding this insufferable, I flicked channel 4 and there was a report about 8 people dead by terrorism. Wondering what big tourist mecca got hit this time, the cameras shot the location and there was the bike lane I use on occasion. The anchor people and correspondents seemingly were downplaying the severity of the attack though, and also reiterating about the resiliency of the people of this city.

The other fucked up things is that only two major networks were still covering it and the 3 major locals were still continuing regular programming. Fox showed it’s awful and unnecessary pre-game show, PIX showed the heinous Goldbergs re-run, and CBS strangely uninterrupted the useless celebrity distraction show Entertainment Tonight.

Something told me that parade was going to happen no matter what. And wondered if this was an appropriate time to show resiliency just a few short hours after this massacre, which could have been exceedingly worse if this guy decided to attack a few hours later during rush hour when the bike lane has hundreds of cyclists on it. When the truck attack on Bastille Day in Nice,France on the beach promenade which killed over 80 people, did the media, elected officials and police there advised people to go to niteclubs and still celebrate the holiday afterwards, or even hours later? When the attack at London Bridge happened just a few months ago, did the mayor tell people to continue shopping, mingling and go pub hopping?

More insane was the people being interviewed on the street as the parade was occurring. A lot of people were having a blast despite knowing, acknowledging or being informed of the attack and casualties. And people get in tizzy when you tell a topical joke about a tragedy as being “too soon”. Certainly “too soon” should have qualified in letting the parade go on.

For a city that suffered the worst terrorist attack in recent history on 9/11, and all the fear induced and the sacrificing of civil liberties of the citizens, it seems like the lessons of it are still being refused to be heeded. Especially that this city since then has virtually, and quite literally become a theme park. Fun and revelry have taken precedence over liberty and even security.

It took a while, but a truck attack, the number one and apparently only method that Isis and their offshoots can utilize to accomplish their vile missions, has finally happened here, and the city and news media actually under-reacted just so a parade can proceed. Hell, even Cuomo and de Blasio looked like they were more dismayed that the parade will be ruined than about the act of terror and the deaths and injuries it caused.

We are so not prepared. Well, if you see something, say something. After you do that, go spend your money and be merry like a good consumer and expect the obligatory and arbitrary random search by the typical over-reaction by the NYPD under orders from the higher brass after the tragedy.