Go ahead and try. I triple dog dare you.

WNYC: City Board of Elections Admits It Broke the Law, Accepts Reforms

The New York City Board of Elections is admitting it broke state and federal law when it improperly removed voters from the rolls ahead of the presidential primary last spring, including more than 117,000 voters in Brooklyn.

That’s according to a draft consent decree announced Tuesday— nearly a year after the Board was sued in federal court for violating the National Voter Registration Act and state election law.

As a part of the settlement, the Board agreed to a series of remedial measures that will be in place at least through the next presidential election, November 2020 — pending court approval. The deal restores the rights of improperly purged voters and establishes a comprehensive plan to prevent illegal voter purges in future elections.

“I see their willingness to grapple with this problem as a significant step forward,” said Susan Lerner, head of the good government group Common Cause New York, the lead plaintiff in the case.

The lawsuit was originally filed in November 2016 by the Lawyers Committee for Civil Rights Under the Law, Latino Justice/PRLDEF and Dechert LLP on behalf of Common Cause New York and several individual plaintiffs. In early 2017, both the Justice Department and New York State Attorney General’s office made motions to join the lawsuit.

“The suit was commenced because there were real problems,” said Ezra Rosenberg, with the Lawyers’ Committee for Civil Rights Under the Law. “People were being kicked off the voter list even though they were eligible to vote in New York City.”

The consent decree requires the board to submit a plan to fix how it manages its voter rolls within 90 days. That includes documenting all the procedures associated with list maintenance and identifying specific staff at the central office and in the boroughs to oversee these functions.

NY Daily News: NYC’s Board of Elections will admit it purged more than 200,000 voters from city rolls

New York City’s Board of Elections will acknowledge it broke the law and be making serious changes in its practices, according to the proposed settlement of a legal fight over the purge of more than 200,000 voters from city rolls.

After many Brooklyn residents arrived at the polls during last year’s presidential primary to learn they were deemed ineligible to vote, the good government group Common Cause New York filed suit. State Attorney General Eric Schneiderman and the Brooklyn U.S. Attorney’s office joined the litigation.

But rather than slug it out in Brooklyn federal court, the sides have been working on a settlement for months. Now, a proposed pact slated for filing Wednesday would mandate reforms in the city election agency.

In a statement, Schneiderman said the city’s Board of Elections “illegally purged over 200,000 New Yorkers from the rolls, violating the law and New Yorkers’ trust in the institutions meant to protect their rights.”

Schneiderman said the proposed settlement “would overhaul NYCBOE’s practices for maintaining voter rolls, ensuring that the issues that led to the purges are addressed, and establishing frequent monitoring and oversight. My office will continue to protect all voters’ access to the polls and continue to fight to expand voting rights.”

First off before the obligatory rant, viewers should see how this was covered by the NY Daily News above in the actual newspaper, where yours truly and a vast majority of citizens still get their information first. It was buried in a bitty place in the middle of page 18:

Something of this severity should have been on the front page if the editors genuinely gave a damn about their readers. But I guess that because of the banal settlement the editors didn’t warrant it the attention they would give of Trump’s latest twitter vomit or some former child star turned skank adult’s recent exhibitions.

Now here’s something to ponder about as you head to the polls today citizens, or if you don’t bother to show up at all keeping the system rotten to the core and composed of feces.

For the plaintiff’s, being Common Cause, reaction to the leniency towards this attack on the voters, which resembles a sinister modern day tech version of suppressing suffrage involving all that resembles content and closure. When if it isn’t for the current cynicism of government and acceptance of endemic corruption and the decline of voter interest and turnouts because of it, that the individuals involved in this purge should be hit with massive fines, the loss of their jobs and even imprisonment for their reprehensible actions in the disenfranchisement of the registered voters. This is no better, in a passive aggressive method, than the way farcical obligatory elections are held under dictatorships. Instead these assholes at the B.O.E. get short suspensions and lame restructuring of their processes.

The twisted part of this current blight on this nation, the U.S.A., is how the methods to remove registrations off the rolls, which were mostly Hispanic and Asian, was almost similar to the tactics arranged by GOP officials, including current White House aide to investigate national voter fraud Kris Kobach to purge voter rolls in red states according to muckraking journalist Greg Palast:

Starting in 2013 – just as the Supreme Court gutted the Voting Rights Act – a coterie of Trump operatives, under the direction of Kris Kobach, Kansas Secretary of State, created a system to purge 1.1 million Americans of color from the voter rolls of GOP–controlled states.

The system, called Crosscheck, is detailed in my Rolling Stone report,
“The GOP’s Stealth War on Voters,” 8/24/2016.

On Tuesday, we saw Crosscheck elect a Republican Senate and as President, Donald Trump.  The electoral putsch was aided by nine other methods of attacking the right to vote of Black, Latino and Asian-American voters, methods detailed in my book and film, including “Caging,” “purging,” blocking legitimate registrations, and wrongly shunting millions to “provisional” ballots that will never be counted.

Trump signaled the use of “Crosscheck” when he claimed the election is “rigged” because “people are voting many, many times.”  His operative Kobach, who also advised Trump on building a wall on the southern border, devised a list of 7.2 million “potential” double voters—1.1 million of which were removed from the voter rolls by Tuesday. The list is loaded overwhelmingly with voters of color and the poor. Here’s a sample of the list

Those accused of criminal double voting include, for example, Donald Alexander Webster Jr. of Ohio who is accused of voting a second time in Virginia as Donald EUGENE Webster SR.

No, not everyone on the list loses their vote.  But this was not the only racially poisonous tactic that accounted for this purloined victory by Trump and GOP candidates.

For example, in the swing state of North Carolina, it was reported that 6,700 Black folk lost their registrations because their registrations had been challenged by a group called Voter Integrity Project (VIP). VIP sent letters to households in Black communities “do not forward.”  If the voter had moved within the same building, or somehow did not get their mail (e.g. if their name was not on a mail box), they were challenged as “ghost” voters.  GOP voting officials happily complied with VIP with instant cancellation of registrations.

The 6,700 identified in two counties were returned to the rolls through a lawsuit.  However, there was not one mention in the press that VIP was also behind Crosscheck in North Carolina; nor that its leader, Col. Jay Delancy, whom I’ve tracked for years has previously used this vote thievery, known as “caging,” for years.  Doubtless the caging game was wider and deeper than reported.  And by the way, caging, as my Rolling Stone co-author, attorney Robert F. Kennedy Jr., tells me, is “a felony, it’s illegal, and punishable by high fines and even jail time.”

There is still much investigation to do.  For example, there are millions of “provisional” ballots, “spoiled” (invalidated) ballots and ballots rejected from the approximately 30 million mailed in.  Unlike reporting in Britain, US media does not report the ballots that are rejected and tossed out—because, after all, as Joe Biden says, “Our elections are the envy of the world.”  Only in Kazakhstan, Joe.

While there is a great deal of work to do, much documentation still to analyze, we’ll have to pry it from partisan voting chiefs who stamp the scrub lists, Crosscheck lists and ballot records, “confidential.”

But, the evidence already in our hands makes me sadly confident in saying, Jim Crow, not the voters, elected Mr. Trump.

Now check out the what WNYC found which names were removed in the Brooklyn Primary Purge, in this case all were Hispanics and Asians: 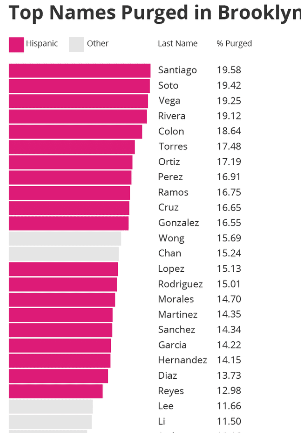 Now combine this with the recent revelations by former DNC Donna Brazile in her new book, which comedian Ron Placone remarked that the only way justice can prevail for people is if someone is given a million dollar book deal, on how “Manifest” Hillary Clinton took full control of the DNC in 2015 right before she declared her candidacy and a mysterious vanishing of 60,000 registered Democrats off the county rolls in Brooklyn caused by a CD-rom filled with spreadsheets of the voters that also disappeared in the same fashion. It looks like the de facto leader and candidate wanted to nip this primary in New York in the bud and the B.O.E. could conveniently blame the disenfranchising on a tech glitch or in this situation, oversight and incompetence. Because being stupid is not illegal. The latter has been utilized even after the supposed corrections were promised in bogus and misleading postcards after the presidential primary purge.

Even though these devious machinations passing as clerical and digital errors have been going on reportedly since 2013, these didn’t take true devastating effect until about the time when Ms. Clinton was running for president and the B.O.E. wasted taxpayer dollars trying to ward off accusations and lawsuits, which are still ongoing.

There has to be a tipping point for criminal incompetence like this. Although the slick execution and sophistication of this suppression of votes reveals and confirms a massive conspiracy for certain people to hold on to power. These wide ranging tactics, since they clearly and blatantly involve race, violates LBJ’s voting rights act from 1965 that was ratified after the brutal attacks in Selma, Alabama. Unfortunately, incompetence and stupidity, and the monstrous ambitions of a craven individual don’t count as or are exempt from civil rights violations.

It is preposterous that the B.O.E. can be trusted with the flow and the institution of democracy, no matter how much they fixed it after they fixed it.

Well it’s all better now. And the nation, particularly the citizens of South Brooklyn, can walk with their heads held high when they go to the polls and pick their favored candidates. Although with certainty, the cynicism will remain and continue to fester when the day is done and with 2 or 4 more years of disappointment from their chosen leaders. And the permanent government that has been made and nurtured by the willful mistakes and accidents by the Board Of Elections.

Don’t let this dissuade you all from voting though. Because that’s what they, the establishment politicians and the lousy status quo want. Change is obviously going to take a while and this is the only power you all have to obliterate the machine and the big club of owners ruining the republic and democracy. Fill in the circle and fuck up their pampered lives and elitist circles. End this shitty cycle one piece/one vote at a time.