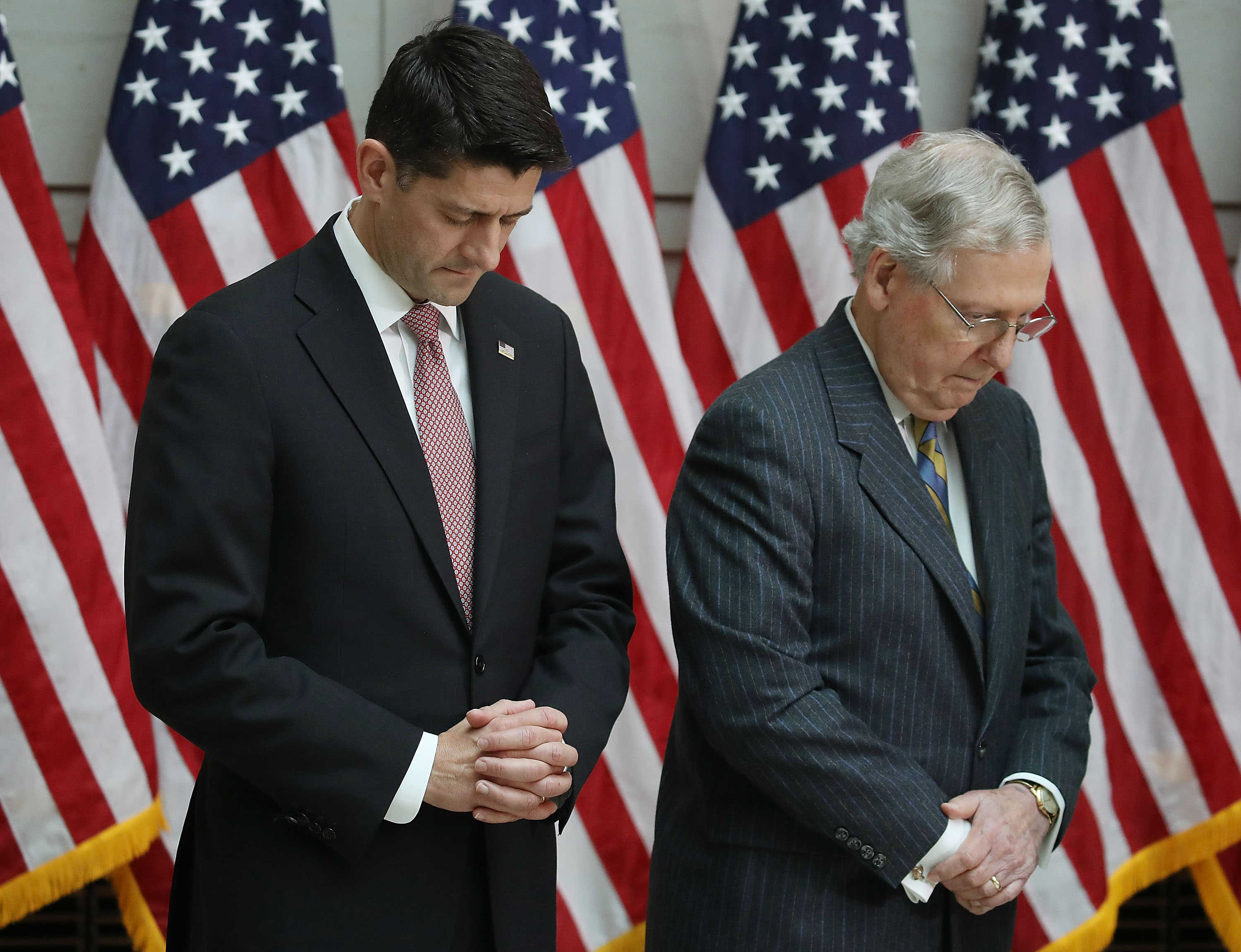 With god on their side, Speaker Ryan and Senator McConnell in a moment of solemn praise for growing wealth disparity. Say your prayers, nation and society.

Washington D.C., The Cesspool By The Potomac, U.S.A.

“The city of Washington was built on a stagnant swamp some 200 years ago, and very little has changed. It stank then, and it stinks now. Only today, it is the fetid stench of corruption that hangs in the air”

“Cash rules everything around me, CREAM get the money, dollar dollar bill y’all”

The “Tax Cut and Jobs Act”, this abominable bill to further continue the repatriation of wealth that has been going on for over 30 years is a virtual death sentence and double taxation on the citizenry of this nation. Unless anyone in the middle and lower classes wins the state lottery or avoids injury or sickness, in 10 years they will be more responsible maintaining the solvency of this country and it’s budget than all the greedy misers it is solidly ascertained to benefit.

This is a budget plan for corporate and inheritance welfare that no one is confident in. No one that counts anyway according to the Senate leader, House speaker, Figurehead Trump and his plutocabinet, which consists of the Tax Policy Center and about 70% of the people of this nation who are aware of this circle jerking by the donor money whoring GOP members of the legislative and the current executive branch.

You think after the last national tax cuts passed with bipartisan approval from the 80’s and 90’s, and the truly irresponsible hazardous ones from 2001, 2003 and the one approved a year after the bailout of the banks in 2009, which was one of the greatest acts of unacknowledged socialism since the New Deal, that these ultra successful corporations and beneficiaries of personal wealth would feel somewhat content with what they have achieved and earned with all the breaks they got. Fuck, no. You think that these people (including corporations, for they are considered individual persons) gave a shit if they were willing to spend so much money on lobbyists influencing legislation to install loopholes and donating to dutiful congressional whores instead of using that cash to give dutiful raises to their employees? Fuck, no.

The gargantuan cut to repatriating money from offshore bank accounts placed there by corporations is supposedly to encourage them to use the savings to create jobs here. So with these obscene tax cuts, will there be raises, better health plans and retirement benefits for all their efforts, eliminating the need for a nationwide raise of the minimum wage to $15 and universal coverage? Fuck no, either. Will all that money they will save legally evading their fair share of taxes go towards innovation or opening up new facilities for manufacturing products like clothes? Fuck no, either. For all that money will continue to stay put in their personal portfolios and accounts, only now they will keep the money in the basements of their sprawling mansions. Hell, they might just be able to build actual poolside banks of their own to keep their government sanctioned ill-gotten gains in and the money they will save on a p.o. box in a hut on some island resort. As the working poor will continue to live check to check and the middle class will continue to struggle to maintain themselves and accrue their own savings.

According to the authors of this bill, these cuts will pay off in the long run with all the new business it’s prospected to generate. What is not prospected by these jackasses is the inevitable burdens this will place on the people and their livelihoods it’s proclaimed to help. What is not prospected is the immediate effect it will have on the people, who vote but don’t donate, on the deleterious effects on their health insurance programs, their ability to own a home or rent, and what will happen when they are aged and unable to work.

It doesn’t even take into account on what happens when the affordable care act gets repealed, which will give millions of people a virtual death sentence lead to a jump in mortality rates. Or even how the future military conflicts, which might include a new world war induced by the idiotic social media insulting by Figurehead Trump and his catastrophic stupid executive order determining Jerusalem as the sole capital city of Israel, will affect the oligarch welfare tax cut. But the small mega-moneyed population doesn’t want to pay taxes for their vast personal property and foreign investments.

And they certainly don’t want to pay for their other properties in coastal cities and metropolises in New York and California, via the cuts for pass-through companies like LLC’s that consist of partners unnamed and unverified and foreign, which have been wholly responsible for the spread of rampant gentrification of them and the elimination of state and local tax deductions for it’s citizens. These new profits will come at the expense of street infrastructure and transit services, law enforcement, fire prevention and public education, which will certainly be vulnerable for privatization.

The obvious beneficiary and most important to our leader Trump, is that all these cuts will benefit him and his brand (though both are not mutually exclusive), his businesses and his family. Making this look like the brazen quid pro quo between this president and the GOP hacks that disgruntledly backed him last year after all the disparagement he gave them. It looks like their masochism paid off.

This bill if verified will have the most detrimental impact on the nation and it’s citizens since the Patriot Act, which has dwindled the freedoms entitled to everyone in the first and fourth amendments and has not stopped or discouraged terrorism at all and like this oligarch welfare bill, was rushed into legislation and approved without a thorough reading. But at least that didn’t have chicken scratch revisions to it placed just hours before convening to vote on it.

This is less legible than the letter Navin Johnson got from Bernadette Peters in The Jerk, which in his case he had difficulty reading because his dog Shithead gave it to him while he was taking a bath.

Besides, according to two sniveling senators, you should take responsibility and be more frugal. Sen. Chuck Grassley advises the people, which includes his constituents, to avoid spending money on booze, women and movies. For leisures like those can only be enjoyed by his moneyed donors and trust fund babies, which they will be able to partake more in with all the extra money being doled back to them to enable their frivolous spending habits.

This 500 page abomination is nothing but a government sanctioned Ponzi Scheme. For the multi-trillion dollar plan to be funded, it has to rely on induced investment monies extracted from the paychecks of the current workforce, then the future workforce once they get old and retire, depriving them of their hard earned money that would have went to pay for college debts and/or expensive health plans. And in the next 10 years their paychecks as retired people dependent on the social security and medicare that they invested in by working all their lives to enhance more obscene personal wealth for oligarchs and their heirs and the avaricious executives of multinational corporations and their shareholders.

I think this POS tax bill is misportrayed as rich vs middle class. It's more properly seen as the elderly screwing the young.

Most of all, Trump and his family and his oligarch peers make off like the bandits they are. As their long time American Dreams, which will by law become a luxury, for collective wealth concentration will become infinite.  And no one will be able to do a fucking thing. Even a true revolution would be thwarted, because they will have the finances to own their own police and military. Which in the case of Figurehead Trump, he already has with the votes of you, the people.

The ESSENTIAL FACT about the tax bill isn't that it does shit for the middle class & will raise taxes on many or that it is a give-away to the ultra-wealthy, it is that it will cause at least $1.5 trillion in revenues to disappear, leading inevitably to cuts in SS & Medicare.

Essentially, it’s a domestic attack on everyone and the nation, not immediate like being attacked by a foreign enemy looming on the horizon, but a gradually slow disemboweling of people’s personal dwindling finances. It is plain and simple economic fascism. In a way, the oligarch welfare bill is sort of like how that hypothetical question given at polls of what would you do if you just a got a million dollars, except it’s billions over time with the help of a compliant congress of spineless beggars. The answer is clearly “I got mine”, because is if this piece of shit bill does pass, those whores who are in congress and the senate certain to lose their seats by the screwed over voters would not even give a shit because they will be set for life via their investments and personal fortunes, which they had no trouble building while remaining in their elected positions. These tax cuts will give them absolute finality to retire in tax payer funded comfort.

If “It’s A Wonderful Life”‘s Mr. Potter, the biggest symbol of selfishness, corruption and avarice, was still alive or even real, he would be doing donuts in his wheelchair all over the snow covered streets. Just like all those certainly to benefit for the next decade will do in their new private jets and yachts.

One thought on “The Oligarch Welfare Bill”