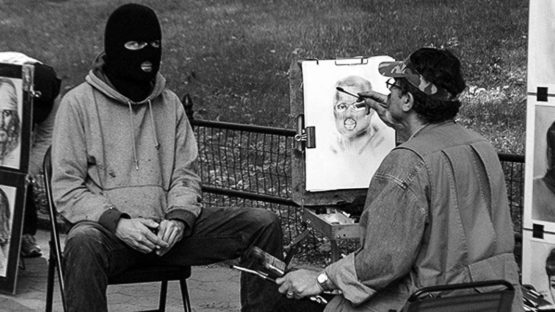 Portraiting of the artist

World renowned graffiti artist Banksy returned to the city after 5 years since his month long public exhibition last week unannounced and left his work in the city, including two spots in South and Mid-East Brooklyn. Keeping up his gold standard of societal and political agitprop messaging.

One was a commissioned work at the wall northeast corner on E Houston St. and Bowery dedicated to a young woman imprisoned for depicting a tank ground invasion on the street in Turkey ordered by lowlife autocrat President Taryip Erdrogan.

Zehra Dogan drew the ire of the insecure coward tyrant by painting a watercolor depiction of his ordered suppression of the citizenry with an exhibition of military force presence on a deserted city street after they bombed buildings following a coup attempt.

It’s a rough modern day version of Picasso’s Guernica. The artist has served one year of a three year sentence for offending the cowardly Erdrogan, whose last visit to these United States was punctuated by ordering his secret service goons to beat down protestors against his presence in a public park during his chummy meeting with Figurehead Trump. Which he certainly felt comfortable doing considering his tyrannical rule in his homeland and the extreme precedence of thwarting the citizenry’s right to assemble and protest by our own elected leaders and police forces.

Banksy also hit a clock on an abandoned bank about to be demolished to make room for more luxury housing on the northwest side of 14th Street and 6th Ave.

A take on the ye olde rat race. When word got out for this piece, the social media flock pounced immediately. And so did the owner of the property who surely sensing the monetary value of Bansky’s art, had the clock removed days later.

His better pointed pieces was in the yet to be gentrified town of Midwood at a decrepit abandoned gas station with a silhouette depiction of a developer cracking an graph upward arrow vector on a group of African-American people. A portrayal of the effect meted by the looming specter of rental market rate speculation spurred by the Gentrification Industrial Complex of predatory real estate and government enabling.

Get the hint working poor and retired insisting in living in Brooklyn for generations. (Hyperallergic/Benjamin Sutton)

This piece got immensely tagged and then strangely blotted over entirely with grey paint. But you can still see the image and the message. It’s rumored to have been ruined by a rival tagger but it’s possible that some toadie summoned by a LLC owner did the dirty deed.

The second piece was of a seal balancing a ball. The ball was actually there already because it once had a logo, probably Gulf. 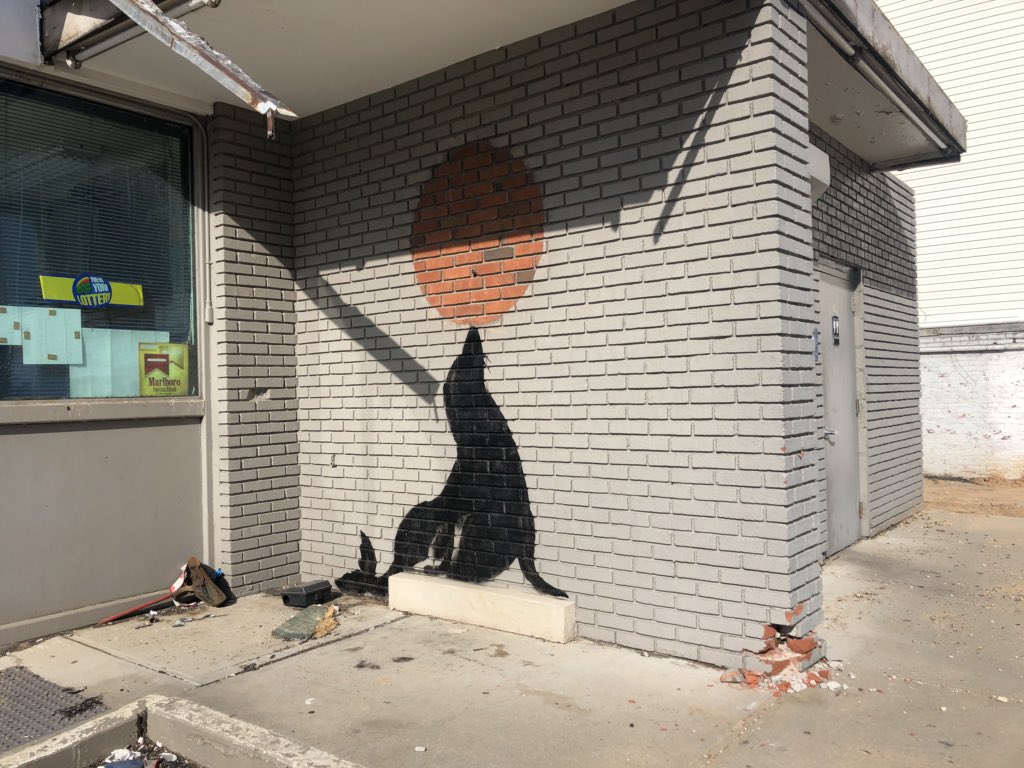 During the week of this spontaneous curation, there were other noticeable sightings of tasteful and provocative urban blight. Like this totaled private garbage truck on 8th avenue between 55th and 56th Streets, which I assumed was Banksy because of his prior pieces using abandoned or wrecked vehicles.

The sight of that askewed Vision Zero emblazoned basket was immediately eye-catching and devilishly ironic. But there was nothing on the world web or even in the local news about this eyesore, and Banksy usually instagrams his work. So this is just the city being stupid and lazy again. First off the truck is parked south and 8th avenue in Midtown is one way going north. And also someone dumped their unwanted records in that big ass basket.

Don’t know if this was supposed to be some kind of message the city was sending about reckless driving. Especially to the private waste management industry, which the city has given carte blanche when it comes to wanton reckless driving and vehicular accident cases, even ones that cause preventable fatalities.

There were also some inspiring creativity by a few of the 63,000 homeless people on the sidewalks of New York. One of them was a safety deposit box across the street from our favorite bailed out bank CEO Jamie Dimon’s JP Morgan building on Vanderbilt and 46th St.. Complete with floral arrangement and a dream catcher. Unfortunately for today’s entrepreneurs and boiler room hedge fund groups, this bank has strict regulations regarding cryptocurrency.

And there is this inspiring dwelling that comes equipped with amenities like al fresco dining, abundant air and light, and free wifi..

…and it comes with a subscription for the New York Times!

It actually looks more ample than what passes for your average upscale modern day studio apartment. Although by the luggage this could be an actual hotel room which is without a fucking doubt more safer than any of the near 100 hotels converted to shelter the housing impaired since that obelisk is equipped with a hi-def security camera.

This one is by some tagger named Cool from an East Village shuttered convenience store.

This one is a house in the Dirty Southeast of Queens. It’s like it the same decor some guy in his 20’s in the 70’s who moved into to his parents basement going by the beaded drapery. But more likely it was in the garage because there is a ton of hoarded shit being obscured and crammed on the patio.

And to conclude this debut post on the street art and coincidental street art phenomenon, there are these ads that have been pasted all over the place by a popular housing ad website, which are clearly targeted towards the new tenants of the 5 boroughs. Actually just Manhattan and Brooklyn, mostly the latter and they are absolutely tone deaf promotions and snarky depictions for the forced gentrification going on today.

The one above is probably the most offensive, being how cordial it looks and how it gloms entire areas for the targeted demo’s convenience and interests. The place marked in black is actually Prospect Park. And what the fuck is a Pho? Clearly these ads and certainly this websites service is not geared for the majority of the citizens looking to make a local transition.

It looks like corrections for proper accuracy were made to reflect the rising inequity of housing that these ads cheekily and carelessly ignore.

The message here is simple, besides that the target demo doubtfully knows everyone in these vast areas. And that is good luck finding your place among the listings on this site. Since the average current market rate rents advertised are beyond the majority of the boroughs citizens average salaries and these fabricated rates have compounded the existential scarcity of legitimate affordable housing and the slow vanishing of rent-stabilized units.

That’s about it for now, but this digital publication is going to focus more on these sightings in the future until a choice between instagram and flickr is made. Thanks to the illicit efforts of Banksy and the insouciance by the authorities for making visualizing his works possible (possibly ordered by REBNY, the owners love exploiting the art form to jack up their rental prices).