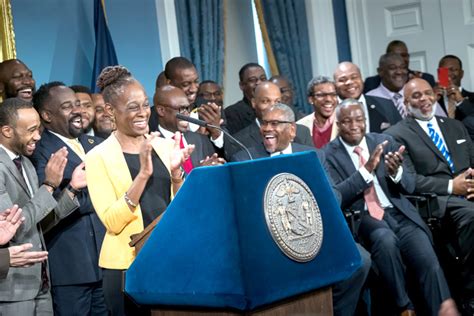 The city will partner with fraternities and service organizations to offer more mental health help to black men, First Lady Chirlane McCray said Monday as she rolled out a program dubbed “Brothers Thrive.”

“People often feel more comfortable talking about these topics when they’re among people who look like them, people who they feel some kinship or affinity with,” McCray said. “It’s just easier to relax and know that their words will have meaning and validity and credibility.”

Holy shit. Chirlane didn’t do what I think she did.

Yes she did. Wow, she did. Co-mayor Chirlane McCray is going to siphon from her and the city’s $800 million dollar mental health initiative THRIVE NYC that she runs in her nepotistic appointed bogus government office position (yes, First Lady is now a government job) to focus primarily on black men in a separate but equal program.

This expensive mental health program has been in existence going on 3 years and somehow, someway it has to have an exclusive department to deal with black men and women (Sisters Thrive was initiated shortly before this recent announcement). How come THRIVE not been effective all this time for afflicted Black People before?

And what does this mean for all the other races of people afflicted with mental illness and issues? Hispanics, Asians, Indians, Middle Eastern, and those of European and Russian origins?

What it does mean is that they will be denied focused treatment by members of certain fraternities of interest assigned by the self-regaled First Lady (did I mention that this is now a government job. Yes I did. Even Melania Trump doesn’t have these bonafides and she’s a real first lady).

So these frats are going to get mental health first aid training from the city. It’s a bit off-putting that being that these are fraternities one would assume that some of them would have doctors or psychiatrists as members. What could this supposed training entail?

And aren’t frats by tradition known by their strict exclusivity? Isn’t having these frats and appointing and providing them government funded training a bit unconstitutional? What would be the reaction if these civic services were bestowed upon a White fraternity? Or to be properly encompassing Chinese, Hispanic, Indian or Jewish and Middle Eastern fraternities? Or even homosexual and transgender groups? Wouldn’t they just be as credible and valid in dealing with suffering citizens of their racial, religious, and national makeup?

You think with 800 million fucking dollars there would be unlimited help being dispensed among all the races. And being that this THRIVE thing has been in existence for 3 years, this Brothers (and Sisters) program confirms that it has been ineffective for and absolutely useless to the Black Communities.

It’s a shame that all that money went to waste when that money could have went to preserve and build new hospitals and community centers for those affected with mental illness and instability and even people under massive duress caused by the cost of living in this city and living in uninhabitable conditions like in NYCHA apartments and homeless hotel rooms.

The motive for this new and selective program might stem from the recent preventable deaths of mentally ill Black citizens in the last few years from excessive and standard procedural force by the NYPD. Will this mean that when 911 is called some frat brother or sorority sister from THRIVE’s team will be embedded with the cops? This is just a simplistic theory but it’s more than what can be said of a program that the majority of New Yorkers don’t know anything about or even if it’s existence is truly justified.

But the First Lady knows what’s good for the mental health and stability for it’s Black citizens. Hopefully now that there is selective focus on them, they will get the help they need that was clearly overlooked before.