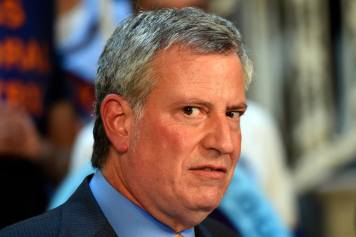 Deadbeat Mayor And Doofus Speaker, what a fucking city we got.

Some unique, as in batshit, legislating is going and went down in City Hall along with the serious matter of making property taxes fair and equitable or whatever for the boroughs homeowners.

The first is Mayor de Blasio’s hubristic proposal/bland demand for City Council to write a bill to fund his bill of $300,000 to his law firm Kramer, Levin, et al. for defending his case that got dismissed after Preet Bharara got fired by Figurehead Donald John Trump and his lucky fat asshead skated by with just a pathetic admonishment by State A.G. Dancin’ Cy Vance for breaking the spirit of the law covering de Faustio’s not at all latent criminal activity using his mayoralty to dole favors and civic services for donor cash.

Let’s get this straight, this mayor, this idiot, wants city council to set up a legal defense fund just for him. And this is coming after he allocated 2.1 million dollars of public funding last year to take care of his hefty bills for his spiritual corruption. What Bad Bill is suggesting will set an atrocious precedent for future elected hacks like him to continue to circumvent campaign laws to influence voters and further nurture the powers of corporations that already have a stranglehold influence on policies and government.

Here is something de Faustio should consider instead of this crass request. He should sell his two houses in Park Slope. To go along with the money he clearly saved paying less taxes on them than citizens who live in less niche areas and pay more, he can surely get a cool 3-4 million for them being that they’re located in the over-rated over-marketed borough of Brooklyn™.

He could also get a part-time job, maybe work the morning shift at a Starbucks near Gracie Mansion, which should cover the time he leaves there to do his 2 borough 7 hour morning commute and workout. Or maybe, since he is basically panhandling already, go to the nearest 99 cent store and get a sharpie marker and some cardboard lying outside a dumpster then sit on a corner traffic light post on the weekend and solicit the profligate cash from sympathetic passerby. Suggestion: write that you need the cash to get on a bus going back to Boston.

So far, City Council has for the moment rebuffed this absurd beggary but with this predominantly fauxgressive bunch and their habitual sneaky methods for passing laws unbeknownst to their constituents, de Faustio just might get it. It all hinges on Speaker Corey Johnson, who was chosen by the Democrat Machine to be a supposed check and independent voice to monitor this mayor’s spending. But this Johnson seems to be more concerned with what doctors put on newborn infants birth certificates.

New Yorkers who do not identify as either male or female may soon have the option to change their birth certificate to a third category.

Under a proposal announced by City Council Speaker Corey Johnson and Mayor Bill de Blasio, adults will have the option to change their given gender to “X.” The proposal would also remove a rule requiring a letter from a medical or mental health professional to change the gender on a birth certificate.

This may be the first recorded case of identity politics being used to deny each individuals identity. The stupidity of this law is beyond belief. When did birth certificates become a gay society cultural taboo?

So Corey, idiot, thinks that doctors shouldn’t determine what sex babies are? Will this mean that if the words “It’s a boy/girl” would be considered a slur and be subject to condemnation or a fine? How is X suppose to help? Especially being that the letter is used to mark the box of say, whether a baby is male or female.

There is absolutely no doubt that what people choose to be should not be oppressed, discriminated against or cast out of society, but this is ridiculous. And these are medical professionals determinations that’s being fucked with. You know, the same determinations that tell when a baby what term it’s in if women or teenage girls choose to get an abortion.

These two proposals are the types of bullshit that’s being discussed by our elected and appointed “representative leaders”. Who continue to waste taxpayer dollars and precious time as the city’s poorest and middle classes still don’t get the essential civic services they need and are due to them even still. Who are more concerned with avoiding their personal responsibility for their knowing unethical lapses and what’s between everyone’s legs and how it shouldn’t define them.