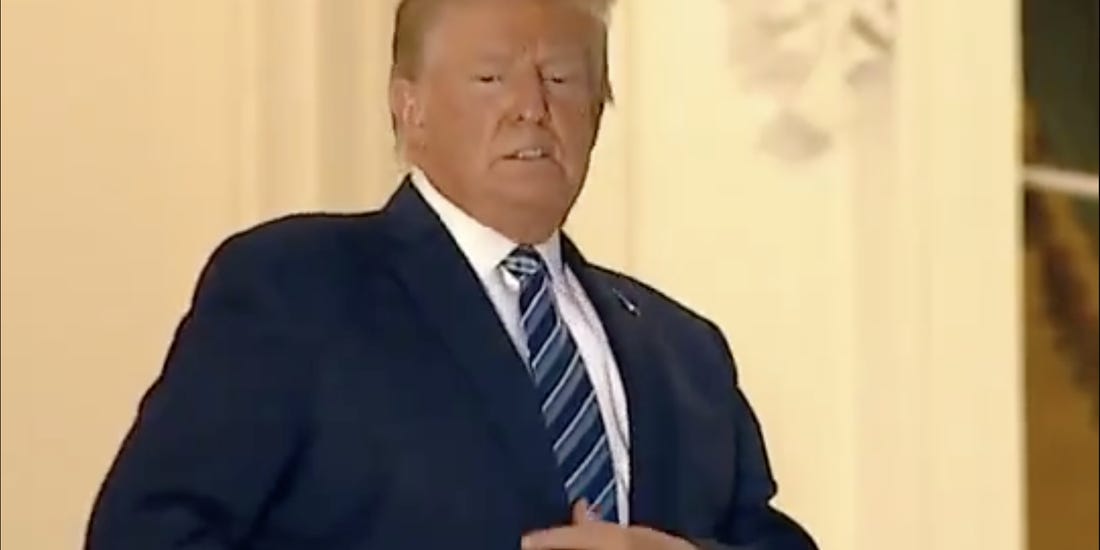 What a way to end a term. All throughout his presidency, Donald Trump frequently employed teasers when he spoke to the press and address the nation through his rare addresses to the people and his millions of tweets, mostly the refrain “we’ll see what happens” Much to the President’s chagrin, he didn’t employ that phrase when he blew off the severity of the COVID and now it’s certainly looking like the novel virus will actually thwart his re-election bid with a fucking vengeance.

Look what’s happened since Donald got infected (and when he knew he was already). While he was recuperating on supplemental oxygen and a Long Island Ice Tea styled cocktail of experimental coronavirus resistant drugs, over 30 people that came in contact or was in the presence of the President also got infected with the COVID. And all signs pointed to and were confirmed by a shitstorm of news reports of the announcement of Trump’s pick to replace the departed Ruth Bader Ginsberg’s supreme court seat to GOP and Big Corporation darling Amy Cohen Barrett in the Rose Garden.

Now it looks as if this mad rush to fill RBG’s position was a huge mistake and Trump and the GOP party should have took their own advice and waited until the election year was over to announce their pick instead of gathering together without masks and appropriate measure of distancing. And continuing the celebration of Trump’s nomination in a soiree inside the White House. Because over 30 people in Trump’s circle caught the contagion.

And these were all of Trump’s closest and most recognizable aides, notably the revolting adviser Stephen Miller and press speaker Kayleign McEnany and former steady state spin meister Kellyanne Conway, who wound up giving the bug to her rebelliously incorrigible and social media savvy daughter (whose online rants made her mom quit her job). COVIDIOT Senator Mike Lee got infected and he hugged two people and two other GOP party senators got the Rona too, which should sideline them from their official duties questioning the justice nominee under oath in the Senate.

On Trump’s re-election team, his campaign manager Bill Seppian tested positive along with a few other aides. Former NJ Governor Chris Christie wound up hospitalized after getting infected and he was working on Trump’s campaign and the RNC Chairperson Rona McDonnell caught the Rona also. Oh my mistake her name is Ronna, fuck it, it still works.

Bad enough Trump decided to play down the virus and his insouciance led to the deaths of 210,000 Americans, but his cocksure defiance of just taking the simplest precaution of wearing a mask allow the virus to spread and  take over his administration and his Republican party allies/sycophants is purely a COVID d’etat. Sure it would not be remiss to cite some kind of divine intervention as obvious as Justice RBG’s apparition hovering over the Rose Garden and hexing it, but Trump and the Senate Republicans were already making a list to fill her seat a week before she died (a list that included Trump’s nemesis Lying Ted Cruz) so they surely don’t give a shit about supernatural shit like that as much as they have fear in the God they act like they believe in. No, the Rona is the real shit, it doesn’t adhere to religion and politics, it doesn’t discriminate and gets everyone. And Trump and his maskless avengers were easy prey for it.

In just a few weeks after Trump got the COVID, “Nothing Will Fundamentally Change” Joe Biden shot up in the polls without doing a damn thing except doing the obvious, wearing the face mask. Trump polling with senior citizens has cratered, a demographic that put him over the top in 2016 (in correlation with millions of people not showing up to vote). Trump also sabotaged himself by announcing on the twitter that he won’t sign a new emergency stimulus bill unless he wins re-election. And the batshit nutty video he produced of him standing tall on the White House balcony, pulling off his mask and gasping for air didn’t work like he thought it would. Although Trump survived, COVID-19 still stomped his ass and his manufactured projection of strength was a sad parody of despotic might.

But apparently, Trump is still trying to put a brave front despite his waning popularity and it looks the president is still loaded on all those steroids and the experimental drugs the taxpayers paid for that are not be available to them or will be even affordable to them when they will be.

He’s not only loaded, he’s straight up tripping balls. Trump is treating his still in process recovery as confirmation of his immunity to the novel virus after his obviously intimidated physician announced he wasn’t a transmission risk anymore. The president even went on Medal of Honor recipient Rush Limbaugh’s show and got into some saber rattling against Iran by using the obscenity “fuck” to emphasize his threat against the nation that was left uncensored by the cancerous blabbermouth’s producers.

Trump unofficially ends his presidency on a high note.

Now the crazy bastard is going back on the campaign trail, greeting his enthusiastic followers again in spite of what professional physicians, the press, and Trump’s million of detractors say (and even Trump’s own advisors). Surely he will be maskless too, as his audience will imitate in kind. The glaring aspect about this projection of bravery against COVID-19 is that it mostly stems not from the President’s (and his allies and followers) aversion to wearing the face masks but it’s to project legitimacy to being able to existentially adjust to the novel virus and to work while in the presence of it.

From the brand new digital news publication the Daily Poster:

To help their corporate donors boost profits and stock prices, Donald Trump and Republican lawmakers have pushed hard to force workers back into unsafe workplaces. During the pandemic, the GOP has brushed off science and reopened economies, demanded liability shields for employers, ended special pandemic unemployment relief, helped Amazon block a worker safety initiative and encouraged states to punish workers who don’t return to their jobs.

For those forced back to COVID-infected workplaces, the Trump administration has weakened the agency that is supposed to be policing workplace safety. And now a new study shows the results: death rates spiked almost immediately after workers pleaded with that agency to help, but were likely ignored.

The analysis of Occupational Safety and Health Administration (OSHA) data comes from researchers at Harvard, Boston Children’s Hospital and the Massachusetts Department of Public Health. It shows that “there is a correlation between OSHA complaints and COVID-19 mortality” — in specific, COVID-related complaints to the agency “are correlated with (COVID-related) deaths 17 days later.”

During the pandemic, researchers note that OSHA “has not issued any emergency or permanent standard specific to COVID-19 exposure at the workplace” and “had issued only four citations related to COVID-19.”

So it’s easy to see why Trump is tweeking on that steroid cocktail he’s on. The president, using his real estate savvy, is trying to legitimize his own diagnosis and inspire the masses to go back to work because he thinks phony courage is the remedy against COVID-19. And the rush to confirm Amy Cohen Barrett, who contracted COVID-19 only a few months ago, makes the prospect to shoot down any OSHA cases brought to SCOTUS highly inevitable.

That is clearly the GOP’s top objective regardless of how many people are killed in the process — and you can even see it in the Supreme Court situation. Trump and Senate Republicans are right now trying to force lawmakers and congressional staff into the COVID hot zone exploding in the U.S. Capitol in order to try to install another corporate rubber-stamp on the Supreme Court, which would ultimately boost corporate profits and crush workers.

Horrifying as that sociopathic plan is, it is merely a microcosm of the GOP’s larger project: Their entire agenda is designed to force workers into unsafe workplaces in order to help their corporate donors.

Those donors want a right-wing Supreme Court, and they don’t care how many federal workers are killed to make that happen.

Evidently with the hot zone Rose Garden nomination party and now with Judge Garrett testifying for the job now, that’s exactly what Trump (and maybe an asymptomatic Judge Cohen Grarret) did, and his top GOP were willing to sacrifice themselves as well. Even if it was a more of a display of herd arrogance and ignorance than herd immunity.

But the existential dread still remains. COVID-19 is still among us, and infecting thousands more a day, even if it’s not killing like it did back in April and May. 50 million people are unemployed and small businesses are dead or in purgatory and schools are still not fully open. Despite Trump’s bombastic tweets of fallacious inspiration, the majority of the American people still have no confidence to fully return to normal. And although Trump’s base is still holding steady, a lot of them are wearing masks at rallies, so there’s not much confidence there either.

The COVID d’etat may not have taken over the entire Trump administration, but they did take over the president himself. Easily too, because the fucker was asking for it. Although he’s still tweeting like a cellphone junkie, he definitely has lost his mojo. It’s only inevitable that he’ll get the Rona again and he’s kind of acting like how a dying man does in the last phase of death, and this round of campaign rallies is basically his bucket list. He probably won’t die, but in all likelihood his presidency will or even if he does get re-elected, he’ll get infected again because he’ll get filled with all those phenomenal virus resistant drugs that he’s loaded on now and probably taking everyday to keep him moving. No wonder he thinks COVID-19 is a blessing from God.

The song's lyrics appear to extol the virtues of the #YMCA. However, in gay culture from which the Village People stemmed, the song is understood as celebrating YMCA's reputation as a popular cruising & hookup spot, particularly for younger gay men.pic.twitter.com/oYsZMwwTe7