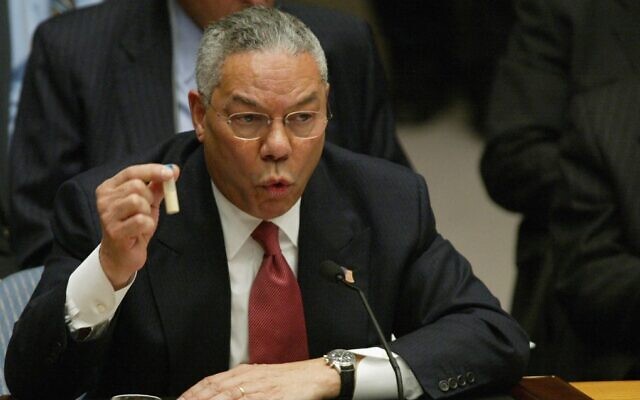 Colin Powell died this morning at the age of 84 from COVID-19. He was fully vaccinated with the Pfizer vaccine(sans booster). Colin Powell had a comorbidity of multiple myeloma, a blood cancer that made the Pfizer vaccines virtually useless, given the multiple confirmed reports of the products rapidly declining efficacy in barely 6 months after inoculation.

I should mention that I’m not a doctor and I got the gist of my opinion from actual corporate news media which was brilliantly compiled in a video released on social media featuring the man behind the curtain of syringes and vaccine bottles, Dr. Anthony Fauci, who’s personal goal and prime directive is for the pandemic to keep going until his last vile breath.

The evolution of the biggest lie of the century

Don't pay attention to the man behind the curtain of syringes and vaccines https://t.co/57tZmOuYkY

There will be thousands of eulogies written by the corporate news and social media complexes about the decorated General and Secretary Of State who had two roles in invading the sovereign nation of Iraq, but his horrid testimony to the United Nations to justify Operation Iraqi Liberation (oops Freedom, make sure the intent sounds good) which led to the deaths of millions of citizens of that nation, the thousands of deaths of U.S. Soldiers and profligate waste of trillions of dollars will always be the memory that sticks out like a one hit wonder number one song.

And in light of the U.S. Government’s lunatic fight to defend the sainted vaccines from medical professional criticism and mandate resisters because of their allegations of preventing “misinformation about them after almost a year of embellishing their effectiveness, it makes Powell’s own role in gaslighting a nation even more brutally ironic.

They are called cases. And infections.

Eventually you will come around just like how people figured out the Iraq war was based on lies. That Colin Powell helped instigate. https://t.co/m9GYSltDJp

This pandemic has enabled Pfizer and also Moderna and Johnson & Johnson to too big to fail status, abutted by their militia of lobbyists and their ownership of corporate news networks and obeisant feckless elected officials in the U.S. Capitol and a recidivist greedy liar in the White House.

But given the passing of this establishment political icon from COVID-19 which already is shaking up the elites who keep telling us how awesome the vaccines are and how the Biden Administration and Mayor de Blasio are weaponizing them to coerce and extort people into getting them or they will lose their jobs and can’t engage in society in their cities, it looks like the only way the defective #COVID19 vaccines are going to be acknowledged as such and to get the mainstream attention it deserves is when an A-list celebrity or athlete dies of COVID after being double or dies from the faulty vax by itself. Just like Rock Hudson with AIDS.

Or even if one survives after contracting COVID-19 from being fully vaccinated and the outcry because of the immensity of that entertainer is too overwhelming to the predominant marketing and narrative of vaccinations, like a Beyonce or more fearsome if a rogue figure like Kanye West gets infected.

Even Big Pharma’s public relations minions will try to undermine the significance of Colin Powell’s passing from his moot vaccinations with their useful idiot accomplices in DC and mass media, the cause celebre patient zero case is already established and the protests against mandates on the city streets that are being maligned will get even bigger when more cases begin to reach the millions as the weather gets colder, leading to congressional hearings against the vaccine monolith merchants and exposes of the bought vaccine minstrels in government.

Then what the fuck are they gonna do.