It wasn’t much long ago when yours truly did a expansive on the street eyewitness story about the much ballyhooed NYC Open Restaurants program (albeit ballyhooed by our feckless and bought elected officials in NYC Council, former mayor Bill de Blasio and current Mayor Eric Adams) and what an actual clusterfuck it was and making a case out it shouldn’t exist anymore. Now thanks to a judge’s recent decision to order the city to make a thorough environmental review of the restaurant shanties all over the five boroughs, it has thankfully put a pounding kibosh on the City Council Cronies plan to make these unsafe, blighted, filthy, ugly and traffic congesting eyesores a permanent part of the street infrastructure which the restaurants have been using for free for the last two years.

SAVAGE court ruling🍿👀: https://t.co/M8YMSVls3x@NYC_DOT isn't a King. It abused its power declaring Open Restaurants had zero impact on our neighborhoods & bypassing an environmental review. @NYCMayor & @NYCCouncil please do the right thing. Go back to start and… pic.twitter.com/q01Pnm80j1

But before the Council Cronies begin their study, I would like to present exhibit A on why every public space these restaurants has usurped must cease to exist and that’s the massive triple cluster shanty on the southwest corner of 32nd St. and 5th Ave, just two blocks away from the Empire State Building.

This is truly the tipping point of public space misuse and the heinous blight that has befouled the streets in the last year, which continues unencumbered because of the willful obliviousness of elected officials and the persistent bickering demands of the hospitality industrial complex lobby, represented by some neoliberal runt named Andrew Rigie.

All these shanties contain an abundance of potted ferns that looked like they haven’t been watered in months. These pics here are actually from December. Who knows what kind of bacteria are hording in these zombie plants

Now it’s springtime 2022 and look and the only thing that’s bloomed inside is refuse.

Judging by the broken plexiglass on all three of these shanties, it looks like some of the city’s 5,000 street homeless decided to use them as shelters. And why the hell not? Because these neglected shanties exactly resembled the city’s equally notorious cluster site building shelters by it’s aesthetics and atmosphere.

Clearly the yellow gates did not deter vagrants from trying to get warmth from the brutal cold winter the city just had.

(Can’t help thinking about how most of this broken plexiglass might have been retrofitted and weaponized as shivs with all the slashings and stabbings going on in the last 5 months.)

What’s interesting about this cluster shanty site is that it’s not even next to a restaurant, which actually goes against the rules to build one on the city streets according to the flaccid set of rules for them set by city council and the Department of Transportation, but it’s actually next to an empty commercial building lot that happens to be occupied with a bunch of other tables and similar plants and ferns inside there. And the lot is also grossly unkempt and blighted.

Apparently, this open restaurants ground zero disaster area was once a foodie event space run by a startup called “cookspace”, which from the optics here has turned out to be another tech company that went belly up during the pandemic.

Even though it is amazingly clear that they were able to salvage their business project and also had the opportunity to add more seating on the dirty street curb thanks to the state and city’s concentrated efforts to save the restaurant industry only. (Illustrated by the enthusiasm by Koreatown’s district council crony rep Keith Powers)

Their website for Maiden Korea has clearly not been updated to reflect the reality of the zombie cluster site they left behind.

It’s amazing how fast this business venture died so fast after building this “oasis” less than a year ago. 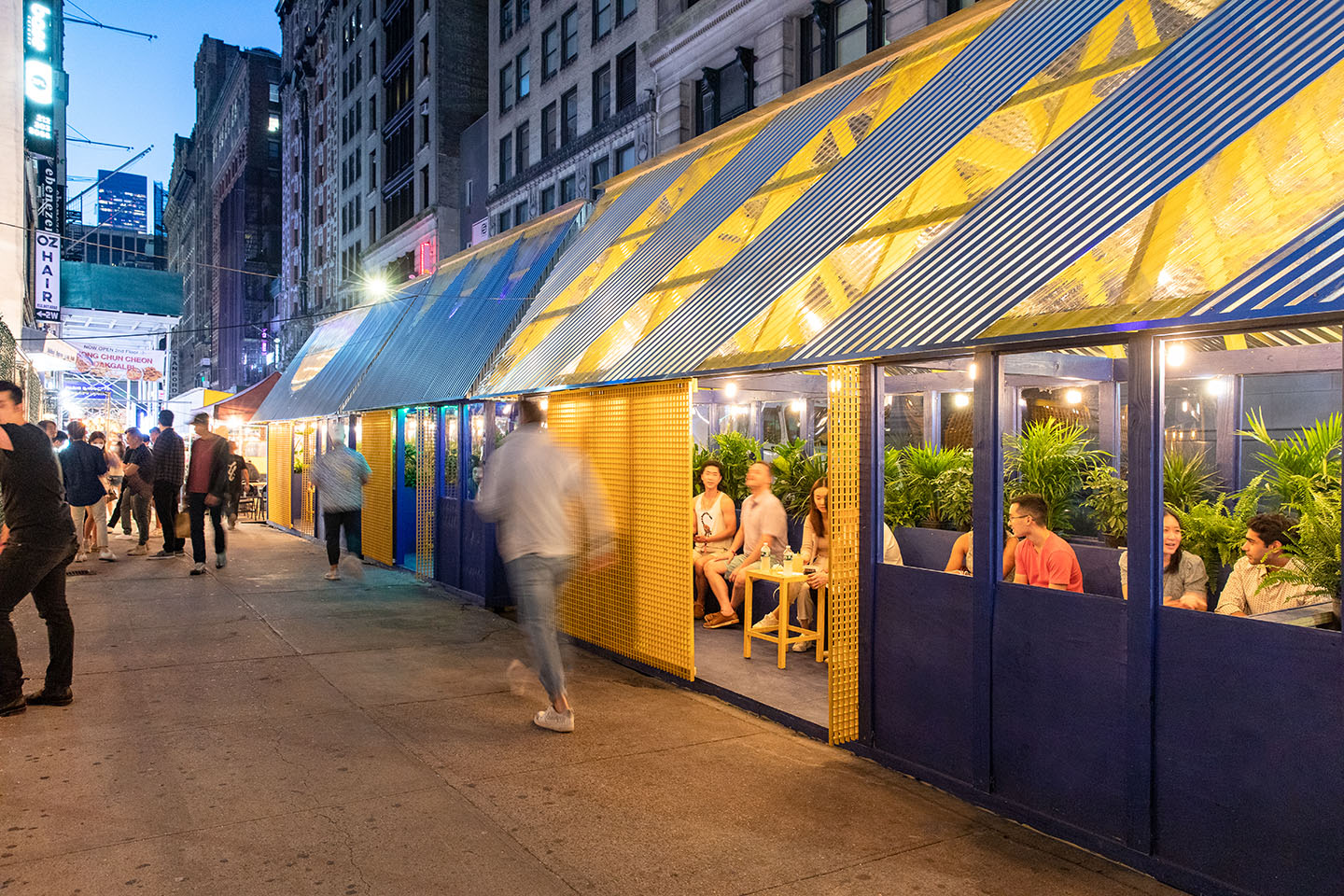 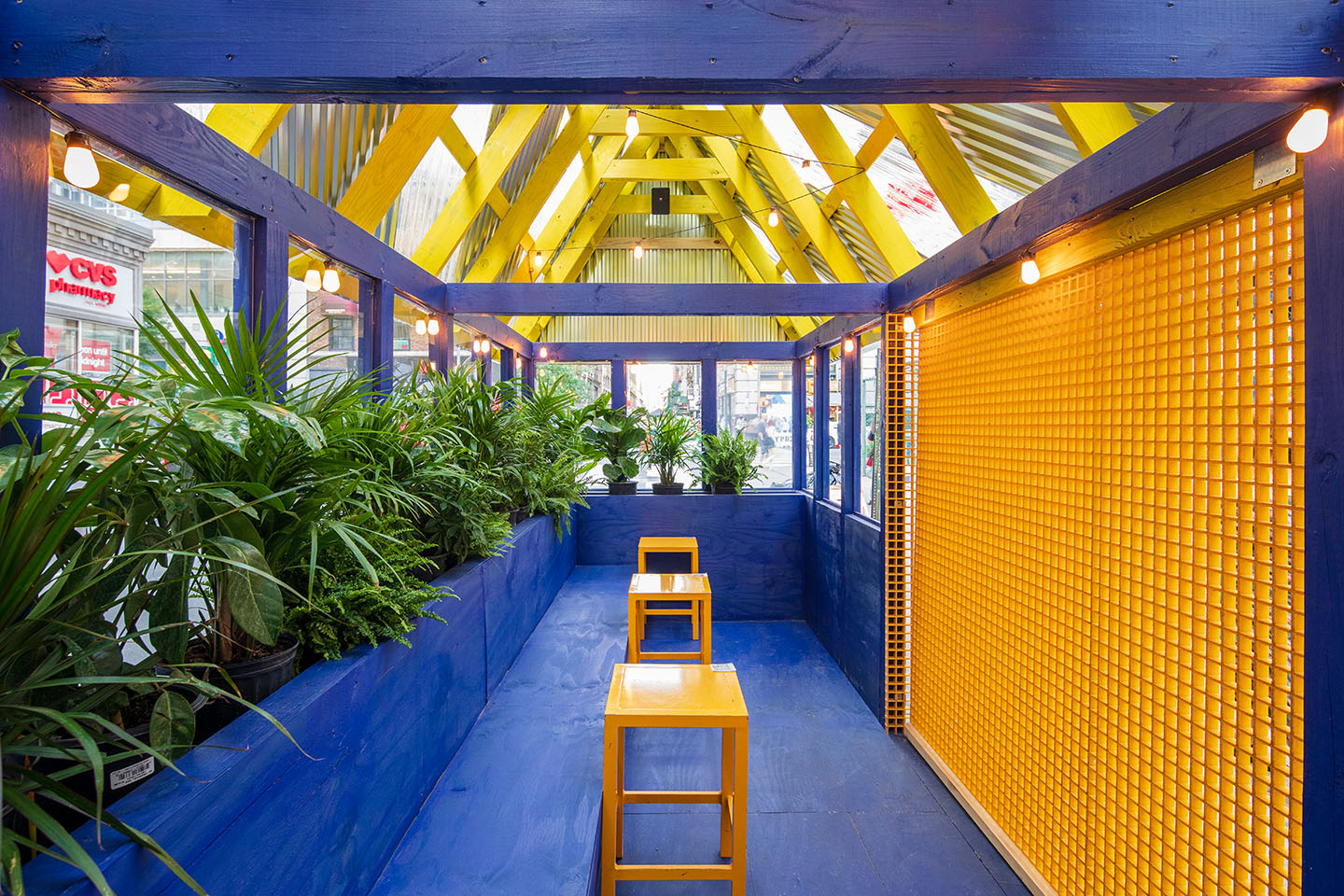 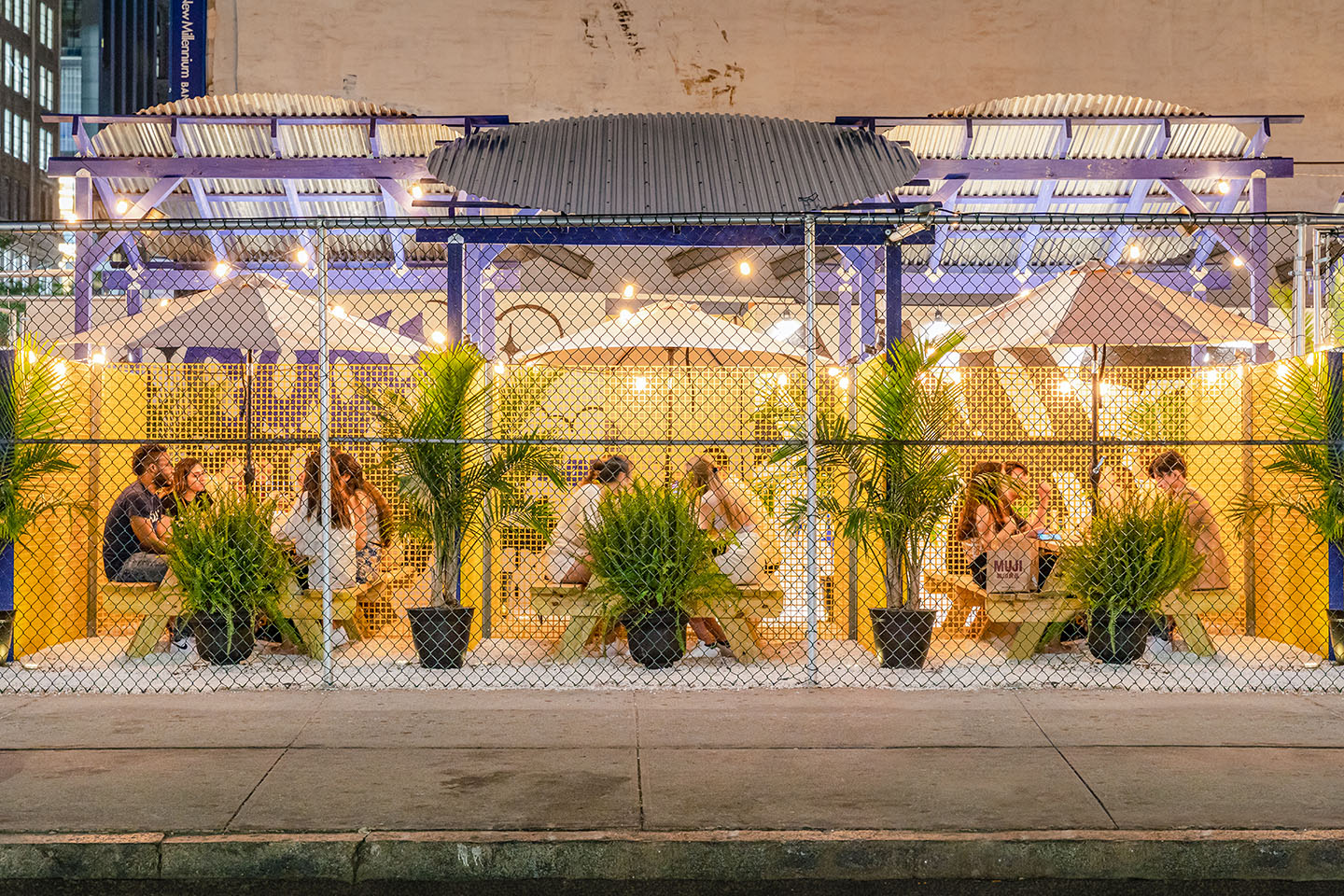 So what the fuck happened to MaidenKorea? You know what, who cares? What’s important is that their investors bailed out of this venture that was created under the rubric of “saving small businesses” just like the city council cronies and hospitality lobby’s picayune embellished claims that these eyesore shanties saved small businesses also and the cretins behind this effort left town this cluster shanty site to rot and who knows when it’s ever going to be razed, since City Council’s brainless legislating has made the city’s street curb spaces a free-for-all land grab and left it the purview of them solely to the Department of Transportation instead of making the regulating of these shanties with the Department of Buildings (and also the Department of Health being that they are standing atop of asphalt with vehicles and their emissions passing by).

Since MaidenKorea is not around anymore to take responsibility for the mess they left behind, maybe the person or LLC that owns the lot might want to be notified, cited and punitively fined for leaving the property and the shanties in such horrid and hazardous conditions but forgettaboutit. The only record of an owner here is non-existent according to the D.O.B..

Which begs the question…does the city own this lot? And does Council Member Keith Powers know something about this and the tech foodie startup that built this grotesque oasis they abandoned? Does cookspace even exist?

This is exactly why every one of these shanties have to fucking go down, especially this cluster shanty site in Koreatown that isn’t even accounted for. And if this shit continues to clog up and foul this corner eventually it will be considered a superfund site.

Besides the justification to keep them is over. Mayor Adams got rid of de Blasio’s stupid ass key to NYC vaccine passport and everyone can eat indoors again because COVID is fucking endemic. If all these high end restaurants want to have extra seating, they can open another restaurant in an empty commercial space and stop usurping much needed parking spaces for people and ample room for the FDNY, NYPD and EMTs to get to their emergencies unobstructed. The streets aren’t free and the taxpayers shouldn’t subsidize them anymore.

I rest my case.