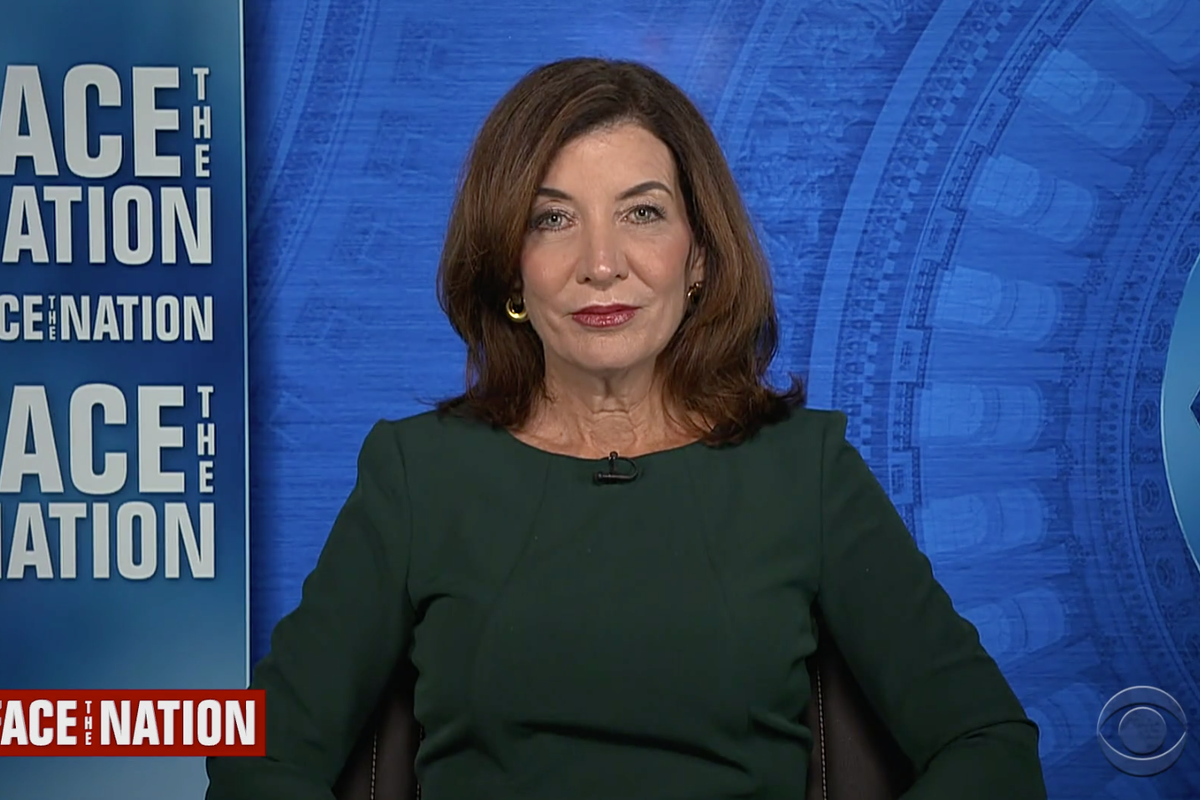 The day Andrew Cuomo departed from the governor’s mansion following a barrage of sexual harassment accusations from staffers and acquaintances was a glorious one and an actual cause for celebration. His exit was quick, anti-climatic and self-debasing, leaving him a hollow shell of the powermad, power brokering, megalomaniac governor that ruled with an iron fist for a decade.

What made it seem sweet at the time was that his replacement became the first woman to run the state of New York, Lt. Governor Kathy Hochul, who arrived with a veneer of feminist glory who promised to restore dignity and transparency to Albany while bringing down the perpetual internecine corruption and obeisance to oligarch and corporate donors that has plagued upstate politics and make government work good for the people in her new interim role she inherited from Mario’s Son.

But something funny happened on Kathy’s way to the governor’s mansion. Since taking over the reins from the skeevy claws of Andy Cuomo in a little less than a year, she carried on and even equaled the same corruption and obeisance committed by her predecessor with absolute impunity and wanton abandon, which was enabled by her Democrat majority allies in the Senate and Assembly just like how they emboldened the last guy.

Governor Hochul also embraced her new power with vigor and immediately abused it like Mario’s son did also. She wielded this right away when she also revived the governor’s executive emergency powers to enforce the vaccine extortion mandate, forcing state workers to comply to vaccinations or get fired. Kathy Clown was so fervently self-righteous about her dictates that she actually had a novelty necklace pendant made with the word “vaxxed” and then demanded of her constituents to be her vaccine apostles to go after what she declared were mindless heathens who refused to comply to the state mandated/dictated jabs.

But it was more than just Jesus and God that made Kathy Clown all hyper-evangelical about vaccines and vaccinations because her proselytizing was more motivated by her biblical devotion to Big Pharma, being that her daughter-in-law is a lobbyist for Biogen Industries which are partnered with Pfizer for their other experimental drug to alleviate Parkinsons and Alzheimers disease that Kathy Clown steered a contract for. 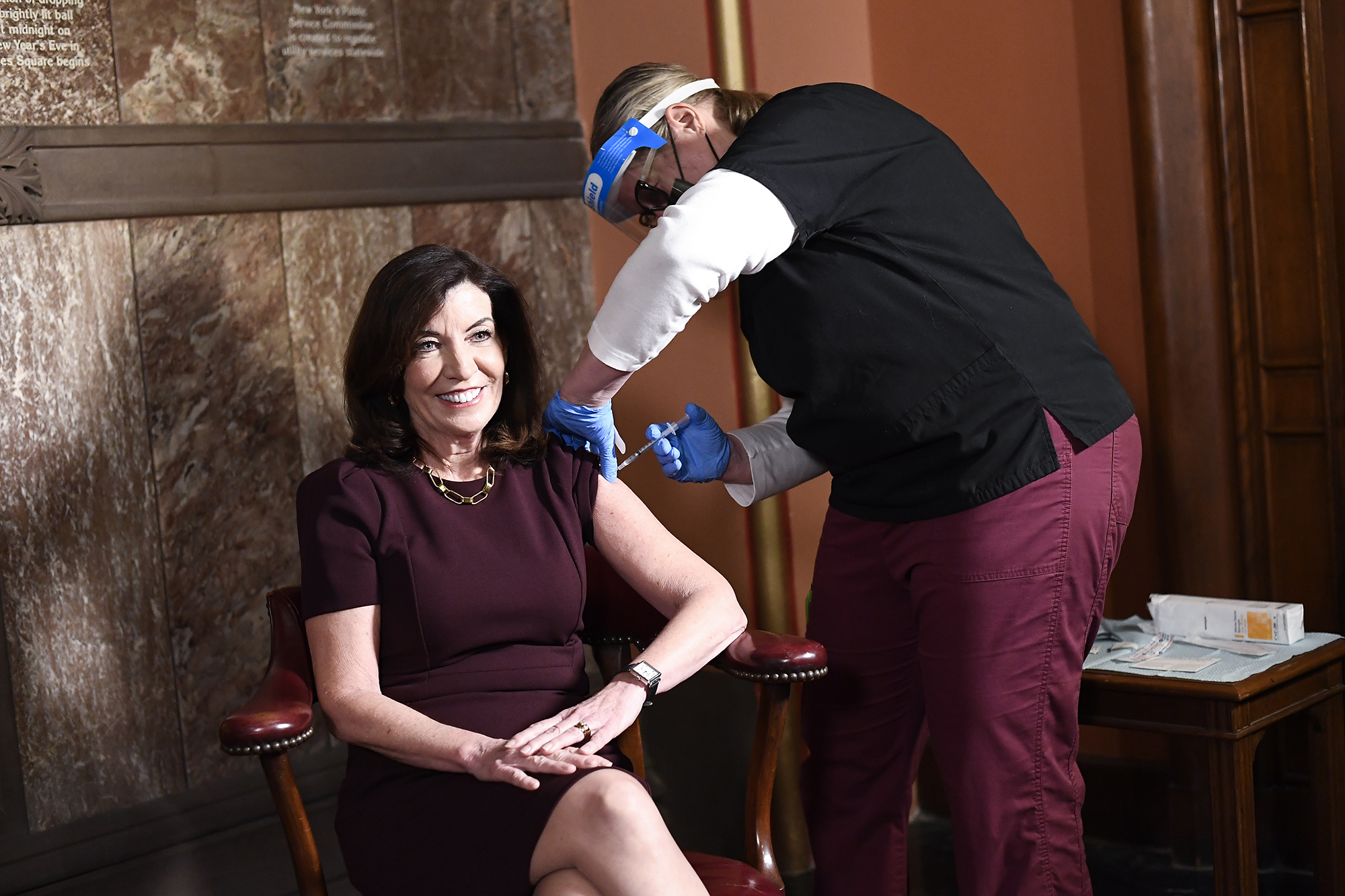 Who is this happy getting vaccinated for the fourth time in less than a year? Kathy Clown that’s who.

While continuing Cuomo’s asinine and two-tier pandemic guidelines, Kathy Clown spent most of her first month as the history making first woman governor by going to clustering fundraiser galas all over New York in a taxpayer funded airplane, compiling over 21 million dollars donations from individual plutocrats and myriad corporations and also tons of dark money from nearly hundreds of LLC’s with unidentifiable partners as Hochul and her campaign refused to disclose who their donors were. Making a mockery of government transparency with blatant pay to play patronage that made Cuomo’s recidivist soliciting tame by comparison. (thanks again to Citizens United). A majority of these LLCs are from real estate with robust building portfolios. One of her largest real estate donors recently exposed has the distinction of being tied to Russian oligarchs that had sanctions levied on them following their nations invasion of Ukraine weeks after she decided to allocate millions of tax dollars for a cyber security apparatus in Albany to thwart hacking from Russia, even though people still had trouble getting rental assistance Hochul promised on the state websites and as well as other agency services and how easy it is for domestic hackers to breach New York City and State’s emergency services webpages to plunder data from citizens, showing that the enemy to our cyber infrastructure will always be us.

When it came time to put the Big Ugly New York State Budget together, Governor Kathy Clown was hard at work making sure the Buffalo Bills got a new stadium, even as her aides were getting mass infected with COVID.  The 1.13 billion dollar corporate welfare giveaway for the Bills new playground got approved by the feckless establishment Democrat Assembly and Senate leaders and electeds despite majority rejection from NYS and NYC citizens who have to pony up the majority of the subsidies, which also includes COVID-19 relief funding and most of it practically extorted from monies accrued from casinos owned by a Native American tribe which Kathy Clown froze the accounts of, while the Florida Man and Wife owners of the team will spend 550 million dollars from their fracked gas industry fortune to pay for the new stadium, giving them 50 million dollars to continue hoarding and Kathy Clown’s constituents get leveled by austerity cuts to basic services from public housing, mental health, drug addiction and mass transit (which will make asshole demands for a congestion pricing tax to pay for it more fervent).

Kathy Clown didn’t just push this irresponsible tax giveaway to her hometown team just for the Bills diehard devoted fans, but obviously also for her brazen conflict of interest involving her husband Bill Hochul and the hospitality corporation, Delaware North who he represents as their top lobbyist and vice president, who already have a contract with the team to sell overpriced concessions for them in their current still standing stadium, given Kathy Clown’s government philanthropy to the Bills owners, it’s rest assured that Delaware North will make even bigger profits as surely will the personal fortunes of Kathy and Buffalo Billion Bill Hochul, whose employer is already making big bank with concession contracts in state parks and casinos all over New York State.

The stupidest corruption Kathy Clown committed was her pick for Lt. Governor, Brian Benjamin. While serving as a State Senator and running in the primary for NYC Comptroller, Benjamin and a Harlem real estate developer he was allied with took brazen advantage of the matching funds law and illicitly raised straw donor cash from unconfirmed and very unlikely sources which included one that was still wearing diapers. Despite their cognizance of multiple investigations of Benjamin’s widespread graft and his blatant denial of it during the shitty vetting process, Kathy Clown’s administrative staffers approved him anyway even though the Governor wasn’t even present in the room when this shitty vetting was happening at the time, obviously and cynically to secure the Black vote in her first gubernatorial run to remain in office. 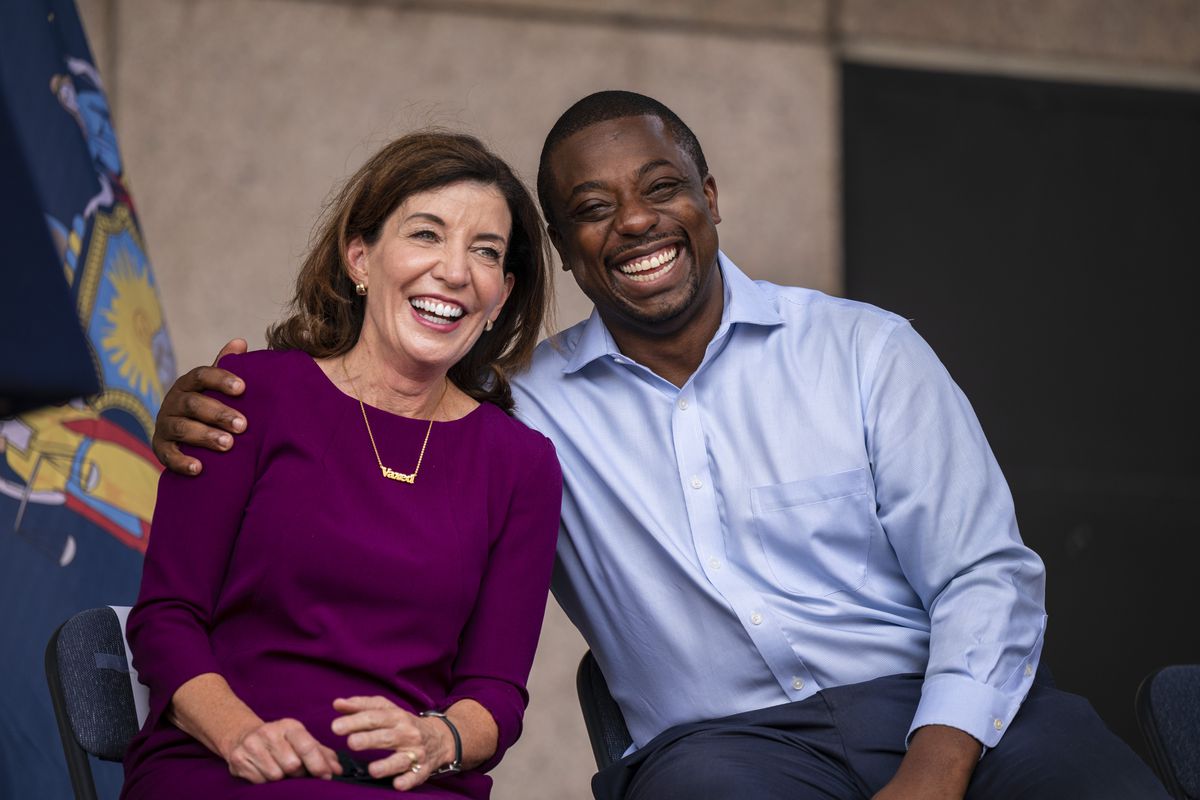 Just like with her own Buffalo Billion deal, the State Assembly rushed to write and pass a bill bailing out Kathy Clown’s campaign to get the toxic Benjamin off the ballot so she could find another Person Of Color to cynically pander and hope to grab votes from with her new pick for Lt. Gov, Congressman Antonio Delgado. Even though his record is clean (dude is backed by bitcoin donors), this pick was fucking stupid because it assured a red wave takeover of congress with GOP candidate Marc Molinaro leading polls to capture it. This follows up Kathy Clown and her establishment fauxgressive Democrat allies in Albany’s pathetic attempt to gerrymander/Hochulmander districts to maintain their one party rule in New York and in DC.

Kathy Clown is able to get away with all this stupid corruption mainly because of the precedent Andrew Cuomo laid down with his own. Because Cuomo was publicly and legally prosecuted, forced into resignation and public exile for the absolute wrong thing when compared to the other government crimes he committed during all that serial groping of his attractive aides. From his dismantling of the Mollen Commission that led to the convictions of former Assembly Speaker Sheldon Silver and Senate Majority Leader Dean Kallos, to his reckless profligate misuse of state funds for a Buffalo Billion microchip plant which led to the indictments and imprisonment of the CEO, and a movie studio in Onondaga County that got recently sold for a buck. And ultimately his ghoulish and heinous abuse of executive power he bestowed on himself during year one of the COVID19 pandemic where he issued edicts exempting nursing homes of their responsibility of the 15,000 plus deaths of elderly people  and writing a book about his handling of the pandemic while all that   gerrymandering of covid patients from hospitals to nursing homes was going on. Those same nursing homes and hospitals have also donated tons of money for Kathy Clown’s return to Albany as well.

Since this series of unfortunate and embarrassing events that have sullied Kathy Clown’s campaign trail and momentum, the governor is trying to pull another secretive boondoggle deal with predominant real estate developer Vornado to turn Penn Station into another Hudson Yards and even got infected with COVID while continuing to maintain her executive powers limiting her constituents liberties and movements. She also continues to hold on to the bail reform laws that has caused crime to explode in the city she’s trying to overdevelop. Kathy Clown also recently got exposed snatching $2,000,000 from state coffers to build a hip loft extra governor’s office in Buffalo in a building that just happens to be owned by another one of her real estate donors. It’s hysterical and even more dismaying how she can get away with the same shit Brian Benjamin got away with even though all he did with his dark money LLC donor cash was fill up his gas tank and pay for a wedding reception.

Unfortunately and even after her disgraceful primary debate performances, this outlandishly stupid woman still gets good poll numbers despite the stupid corruption she’s embroiled in, only proving that Kathy Clown Hochul is the right person and absolutely qualified to run a flailing and failing state run by oligarchs and plutocrats, enabled by an apathetic and exhausted electorate.

Nothing will fundamentally change because of this. Unless you vote.