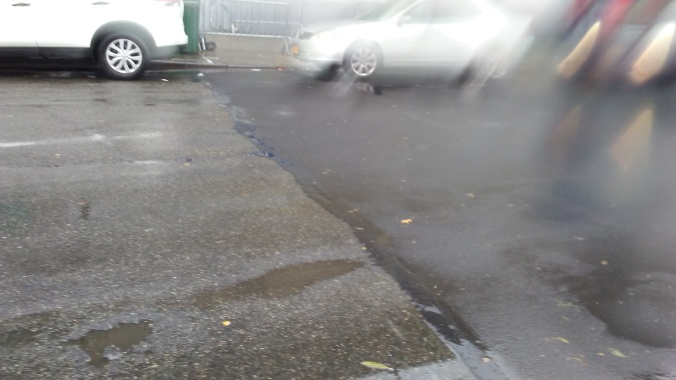 A week before Halloween, an encouraging sight sprung forth to auto owners and cyclists. The decade long dilapidation of Liberty Avenue beginning at Lefferts Boulevard was about to get repaved with fresh tar and asphalt. Being a cyclist myself, it was elating to finally look forward to a smooth path and finally see the cracks and crevices produced by many winters, persistent double and triple parking and K and illegal U-turns by overtly aggressive drivers remediated.

What’s frustrating about this is that a while back the D.O.T. milled and repaved the entirety of Liberty under the elevated train from Rockaway Blvd to the last stop at Lefferts Blvd but they decided for some damn reason not to stretch out the repaving 15 blocks east to the Van Wyck Expressway to at least make it look compatible as well as prevent the road from suffering from further degradation. 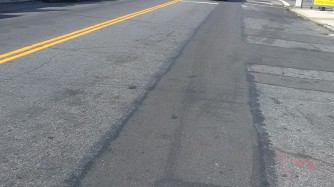 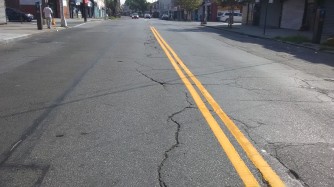 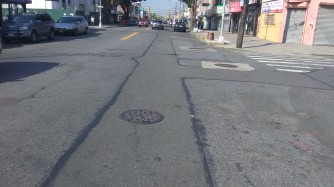 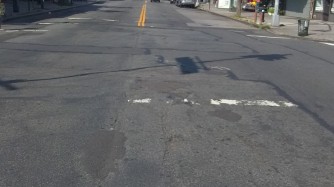 But in yet another case of diminishing returns of half-ass efforts from your city, it turned out that they only repaved 2 fucking blocks. 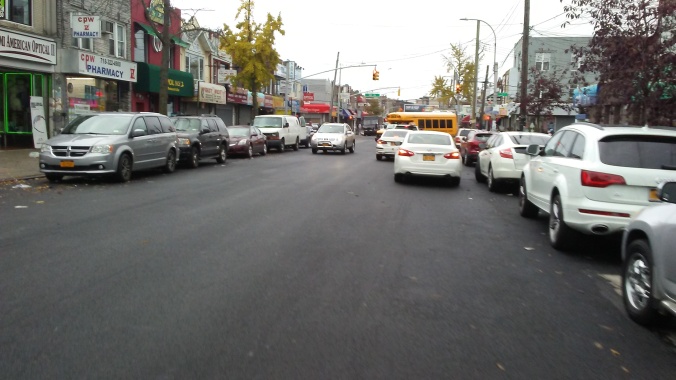 Even more frustrating and fucking maddening is that the long overdue road repair was permitted and possibly inspired and demanded to make way for a film shoot. 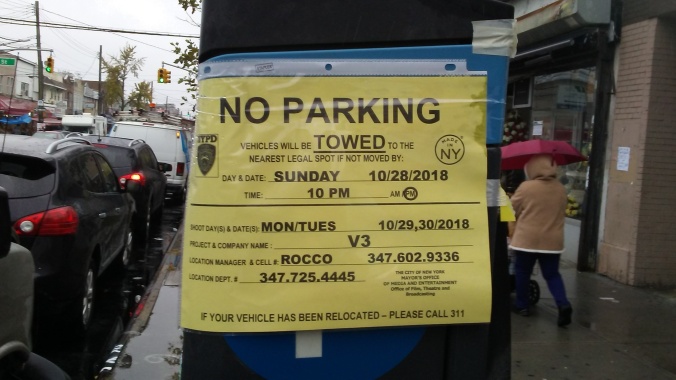 A day after the repaving, film permits appeared taped on lamp posts and this parking meter here for something mysteriously titled V3. It must be some sequel of some cruddy film franchise or maybe it could be a historic film chronicling the nascent stages of the invention of V8 juice when the beverage contained only 3 vegetables.The freshly paved scenery was supervised by someone only named Rocco. 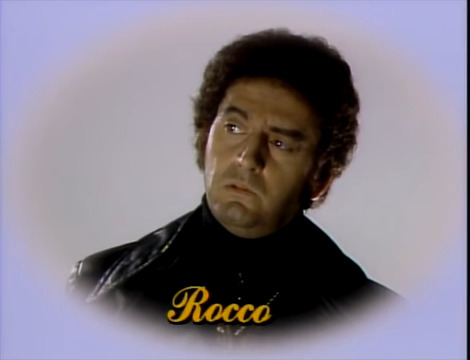 The trucks and trailers with the Jersey or Penn plates and catering truck were supposed to arrive to assemble the proverbial fourth wall for the shoot on Liberty on Monday but a strange development happened on the day that footage above was shot the day before though, all the permits were removed from said posts and meters and the producers decided to move all their rigs on 103rd avenue instead and 120 street. 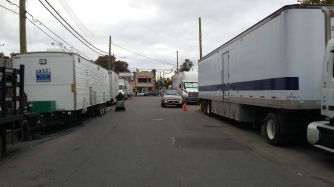 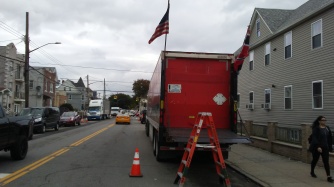 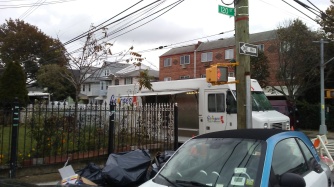 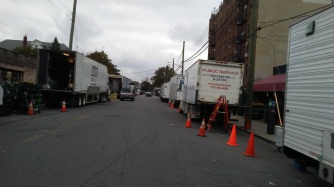 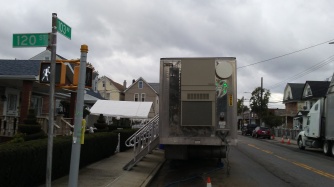 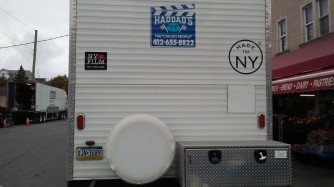 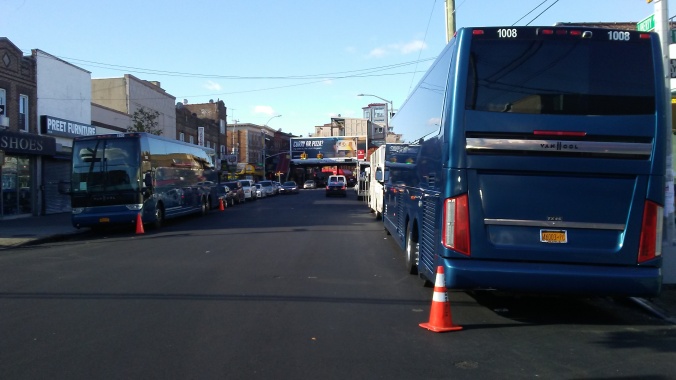 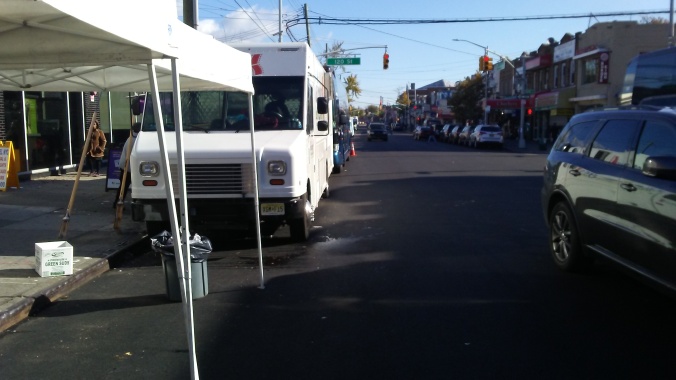 And another charter bus was parked by 103rd avenue around the corner. I assume these vehicles were the mode of transportation for all the creative forces and talent involved with this project. 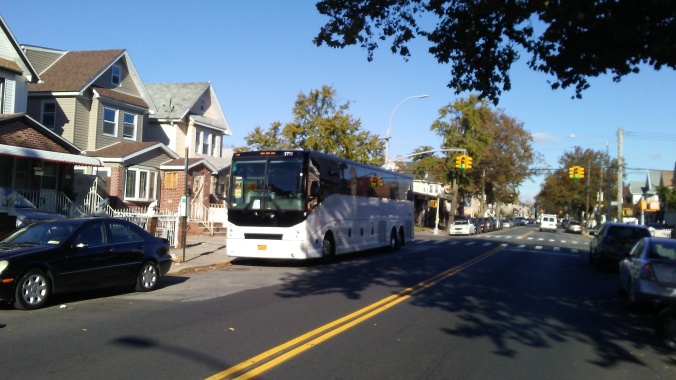 And the action took place at Leo F. Kearns funeral home halfway down the block. 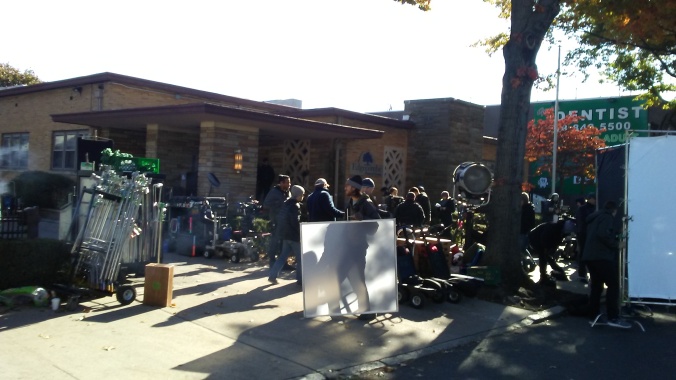 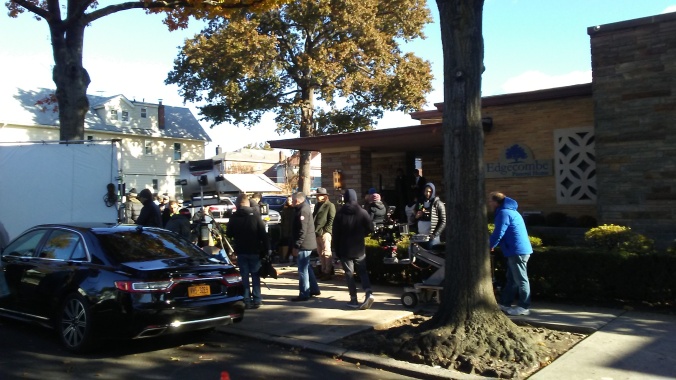 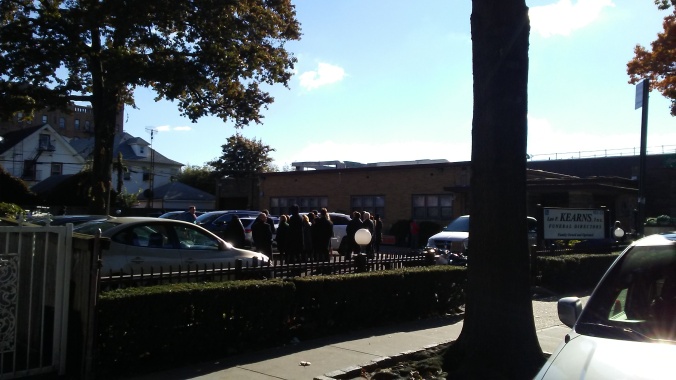 Spoiler alert! Someone in this movie dies!

It’s been a week since this production, and being that it took two days it will probably result in a 2 minute scene. I came to this synopsis because the last few times that major shows were filmed in this enclave of Southeast Queens were HBO’s Bored to Death where they took a day to film Rushmore star Jason Schwartzman ask a cashier a question in a scene that was 10 seconds and the other was also by HBO called …the Night Of where the trailers took over 2 blocks for a good week to film some catalyst scenes for the first episode (sadly, the shows executive producer, James Gandolfini died a week after that shoot in Italy, man it would have been actually cool to bump into him).

Wait, I forgot the odious and easily hacked social media platform corporation that sold out their customers for billions of ad dollars and now government contractor Facebook filmed a show here in the springtime. At least they split so fast it was barely noticeable. Probably because they realized it wasn’t Brooklyn.

Too bad Broad City is ending, it actually would have been nice if those funny ladies stopped by and did some jokes about roti shops.

But I’m digressing, because this road upgrade was obviously done for aesthetic reasons for this V3 movie. Which gives the impression that some special tweeding went down to benefit the film industry over the needs of the driving and riding constituents and also essential bus transit service that continues to get neglected again and again. This can be verified by the I.M. exchange between Cynthia Nixon and Mayor Bill de Blasio when the failed gubernatorial candidate wanted to get her pal in City Hall to halt chopper flights over Central Park that were bothering her director pal’s Shakespeare performances there as she forwarded his complaints to him and your mayor happily and hurriedly obliged and got it done for her. It also helped that TV’s Miranda’s wife was working for Mayor Big Slow at the time as one of his advisors.

So the rest of Liberty will probably remain a broken ass mess in this broke ass city. As well the majority of streets that intersect with it and the avenues south and east of the busy avenue are in equally shitty and even worse. It doesn’t look like there is going to be any upgrade in the near future or even beyond as the new pretty, vibrant and hip burgs get nice things and the dirty southeast of Queens gets dirtier and rockier. And not to mention the massive renovation of the BQE.

And even with this sudden attention from Hollywood, which from the way this city favors this industry, has become an official citizen person of New York. At the expense of safe streets, commuting and the dwindling patience and sanity of it’s residents.