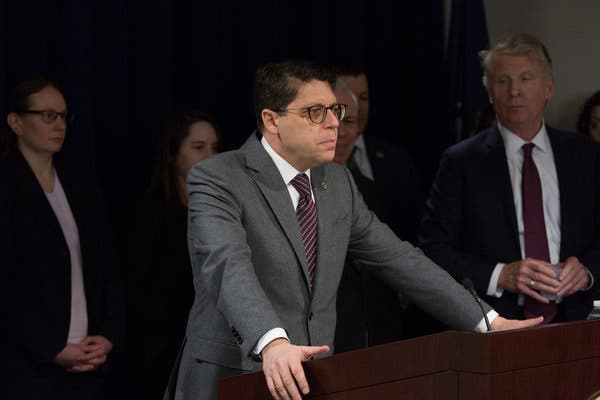 The mayor waited a while since the release of a draft letter crafted by his (technically ours) city attorneys calling for the removal of Department of Investigations head honcho Mark Peters but they finally got it. He did not even strategically wait until this holiday weekend to do it too.

But de Blasio did strategize and machinate for about a year to sack him in order to selfishly avoid the bad optics and pathetically evade suspicions for firing the historically independent top investigator of department bureaucracies. Which under this corrupt and stupid mayor have all become shambling shitshows.

These two one-time allies for liberal causes and accountability have took quite the 180 degree turn since Peters was financing de Blasio’s 2013 campaign which the mayor thanked his friend with an immediate patronage hire for the D.O.I. position. But something wicked happened in the first couple of years, de Blasio spent the majority of his mayoralty distracted with boosting his national profile, forming and running a shady PAC fundraiser in city hall, and spending time and money in burgeoning court hearings involving that illicit fundraising while Peters actually and dutifully concentrated on doing his job and noticed a tons of malfeasance and corruption going on in almost every city office, the standouts being the Administration of Childrens Services, NYCHA, Department of Education, Department of Homeless Services, Department of Buildings and even the NYPD.

Reading Mark Peters letter to City Council, the impression it gives is that de Blasio had been hoping that Peters would let all of his political discrepancies and repulsive influence peddling and pandering slide. It also shows Peters as a man who saw all this endemic crooked behavior effecting city policies and services and was probably driven nuts by the efforts by de Blasio’s minions as they undermined him whether by collusion as what led to his ouster by firing an aide over an authority and agency shakeup at the BOE; or by intimidation as Peters cites one meeting with a top brass cop flashing his piece; or by petty tribal insults as his former colleague Deputy Anthony Shorris derided Peters as an asshole and not a “real friend”.

You gotta wonder what a toll this took on Peters psyche, seeing a guy he raised money for and believed in him turn into a colossal two faced back stabbing prick as he filled his cabinet with like-minded soulless amoral sycophants and opportunists.

Well, de Blasio no longer has to worry about his former friend that he threw under the bus since he got elected and will now insert a person that will be expected to give a veneer of independence and transparency while giving fealty to Bill the whole time, so his honest grafting in City Hall will continue unabated. That way he will be able to waltz around town on occasion, jab an accusatory finger at reporters and escape from New York time to time to promote his progressive activist charades.

But it’s not all bad, despite this brief respite from the facts that incriminated Mayor de Faustio, he still has to deal with the citizens despite his concerted effort to hide from them too. Because a few months ago while Bill de Bastard was dithering like a coward to fire Peters so the optics wouldn’t look horrible (even though it still does), there was a homeless 72-year-old woman named Nathylin Flowers Adesegun that wanted to do some intrepid sleuthing of her own:

Knowing that the snowflake mayor stops at the Park Slope Y during his entire morning ritual every fucking day commuting to Park Row, Ms. Flowers Adesegun, along with housing activist group VOCAL-NY, walked up to where he was “doing yoga” sitting on the floor holding his Blackberry and kindly asked him how come there wasn’t a sufficient amount of “affordable housing” for the homeless and he told her that “he wasn’t doing this right now because he was “working out” and scurried away from her with his NYPD security guards.

Now what Nathylin exposed here wasn’t only what an reprehensible elitist scumbag and shameless liar who betrayed poor and vulnerable people like her is. It’s what she and VOCAL caught de Faustio doing, and that’s this man’s daily tax dollar profligate wasting workout routine is a ruse.

Really, who does yoga in cargo shorts. Who does it while wearing running shoes, although they came in handy here to briskly walk away from a elderly woman demanding answers.

And for a physical workout that takes concentration and inner peace like yoga, he berate sNathylin for disrupting it with her distracting and inconvenient question. The big stinky shitty but is why the fuck is he holding and using his Blackberry during his “workout?”? Obviously, he is bothered and won’t have a discussion with one of the 63,000 plus homeless people of your city but he can talk and text on his blackberry during it. He was actually texting while she was talking to him too.

Knowing the character of our Mayor here, he is still conducting government business on the sly like he did with those non-elected “agents of the city” meetings with lobbyists that worked on his 2013 campaign in City Hall in his first two years. Hell, he could still be calling them to this day. That Blackberry needs to be FOIA‘ed immediately.

Of course this is just a amateur theory. But it still warrants an investigation. Which unfortunately, the guy that seriously devoted his energy to expose and expunge graft and the embedded kakistrocacy and cronyism in our city gov’t departments was expunged himself by his fellow Park Slope compadre.

But it wasn’t in vain, for if it wasn’t for the intrepid work of Peters we all wouldn’t be cognizant of the Rivington House deed flip, the slack responses that led to child deaths by the ACS, the criminal obfuscations at NYCHA by the executives in charge and the amoral workers covering up the dilapidation as well as their asses, and the peculiar happenings going on in the NYPD involving the shakeups at the Special Victims Unit divisions, which may be why rape has been redefined into two genres (stranger and acquaintance rape) and blaming the 25 % rise of rapes this year on the #meToo movement.

We hardly knew ya Mark. But that will surely change pretty goddamn soon. Even the NY Post and Daily News have been solid and blunt covering #MayordeFaustio. For that teflon covering on that bag of dicks is starting to crack.

And rest assured that Ms. Flowers will not be the only one holding Mayor de Faustio accountable for his brazen lies, there will be many other citizens too.

As well as this digital publication, Impunity City.