Well another summer has departed and the belated autumn solstice has arrived today after the climate change influenced unusual warmth of last October, so this would be the right time to document and review this years spring and summer season spent at Riis Park. And it’s not good at all and it has not ended well, as the dramatic changes that came forth with certain and way overdue (and selective) renovations took place

As the days of May got later, there actually was a itty bitty slither of hope for the people’s beach. The Riis Park Bathhouse renovation attracted more concessions and restaurant fare, as well as new food stands on the end of the boardwalk by the abandoned hospital and both were supplied with live laptop DJ’s. More food trucks were added to where the heart of the Riis Park Beach Bazaar takes place, probably for people who do not care for the upscale foodie concept fare being sold in the restaurant inside and the stand by the pitch-and-putt course. There was also the return of the ludicrous high end slum camping concept Camp Rockaway in the dirty chigger infested backyard of the bathhouse. Volleyball courts were also added right in the next yard too for adventurous players and camp guests to play on the hard concrete. It was quite a sight to behold this year on every weekend, as people gathered to enjoy the summer breeze, sharing the company of diverse races and cultures, and extravagantly overpriced fast food, beer and cocktails. Vibrancy in action I believe it’s called.

It probably would be better conveyed and illustrated with pictures: 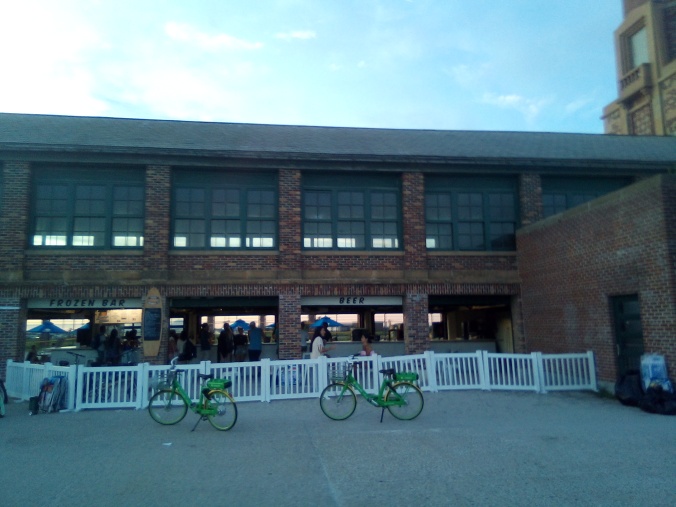 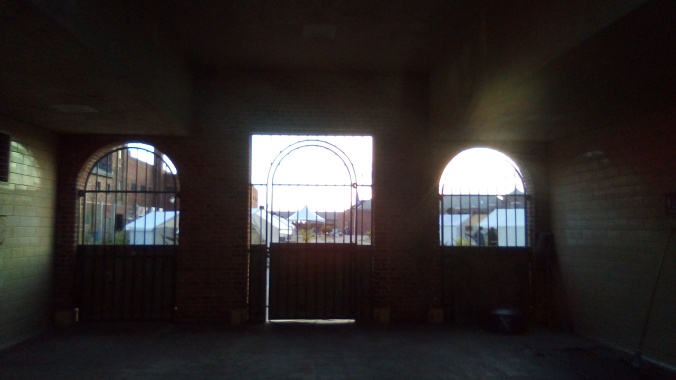 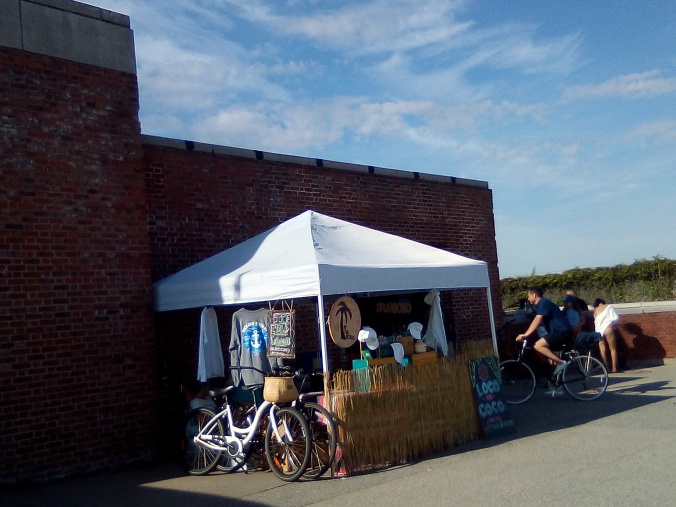 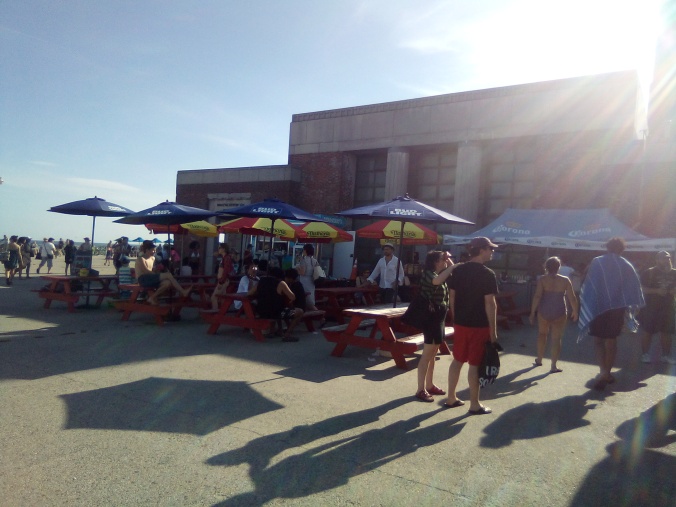 It’s not exactly Coney Island, but it’s adequate enough. Especially in comparison to a decade ago when there was absolutely nothing here until a bunch of Brooklyn entrepreneurs and hipsters “discovered” it. The beach even has a cellphone tower now placed at the “abandoned” Neponsit hospital for all the foodie denizens instagram addictions. There is also app pay service for ordering, so I guess e-motorcycle delivery guys zipping on the boardwalk cutting people off is not a far away prospect.

So now it’s an actual destination spot, which is still pretty hard to believe since the Federal Parks Service didn’t give a fuck about this place for near a half century and let it rot for years. It’s even more surprising that the Bazaar folks and the hipster demo even found this summer place interesting considering it was the default garbage dump for all the neighborhoods destroyed property after Hurricane Sandy hit. 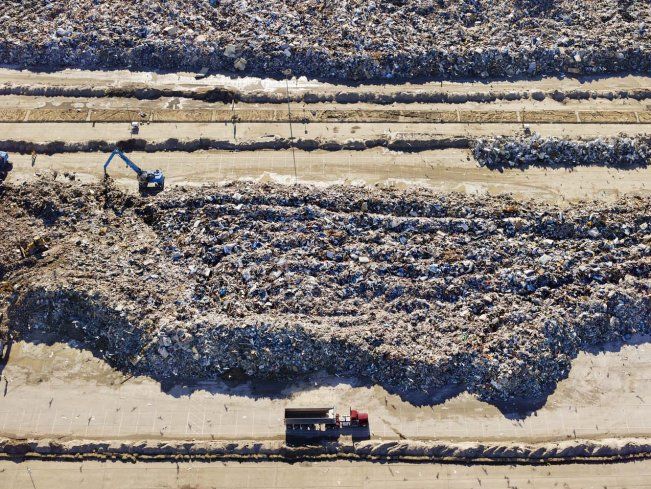 Even the Riis Park clock, which although still ticked and barely survived Sandy’s pounding, suddenly got a major overhaul at the beginning of the summer and now it’s faces glow in the night. 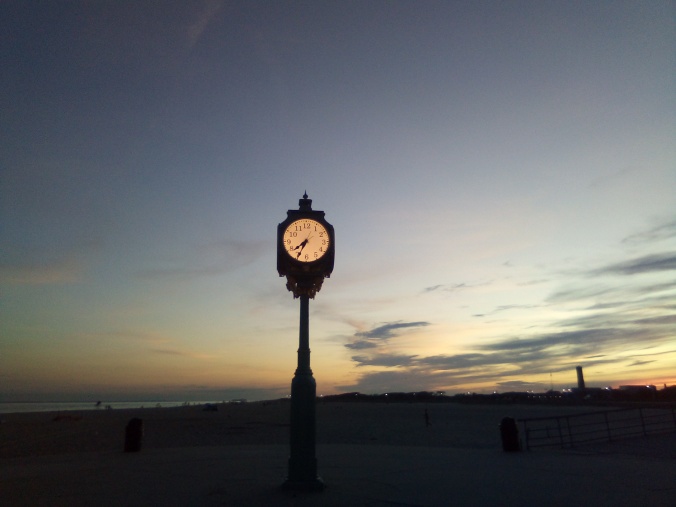 But progress is progress and even though I personally have never purchased anything at the Riis Park Beach Bazaar and avoided their rip off overpriced artisan fast food and cocktails and marked up rancid craft and commercial brand beers and only went by there to use the toilets, I admit seeing business activity like this was good to see. Even if it was just prototypical upscale lifestyle bullshit.

But something was missing from all the free market vibrancy going on the boardwalk. Somehow all the restorations and renovations and all the upscale prices that went into providing a venue for the bazaar did not transfer to a very essential part of beach and parkland that was already a big attraction. In fact it was the only vibrant destination spot before the natural disaster of a category one hurricane and the unwelcome appearance of gentrifiers hit the people’s beach (yes, I’m aware of the irony that gentrifiers are people too) and that is the picnic and grilling area.

This would probably be better illustrated and conveyed with sadness with pictures: 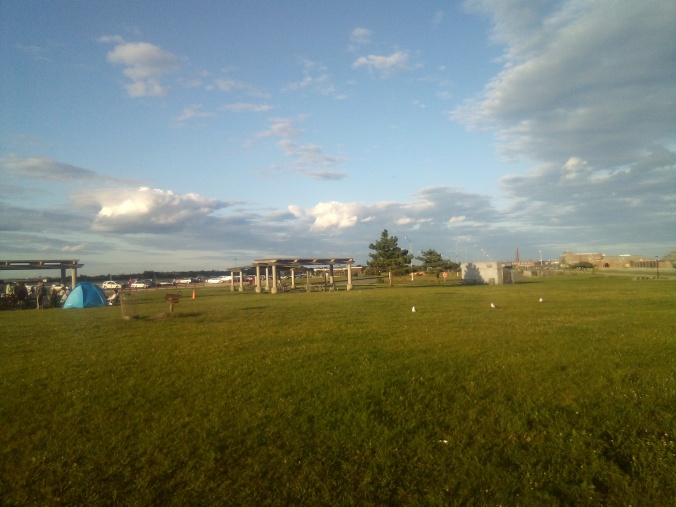 Before that bitch Sandy came, it was arguably the best and most spacious grilling area in the city. Despite how small it looks, it had ample space and plenty of tables and grills for anyone that showed up anytime. It also had a lot of wind swept trees from the powerful Atlantic Ocean winds that gave the picnic area a cool presence and a visual wonder of nature.

But where are the goddamn tables? This is a federally tax payer subsidized picnic area.

Usually they get moved around by people for their cookout parties but there used to be a lot more out here. A lot more. It’s darkly amusing though pretty annoying that the Riis boardwalk has tables while the picnic area barely as any especially this year as the people brought more of their own chairs and tables than ever before. So National Parks apparently feel that the people actually making an effort to come to the people’s beach is not as worthy of table provision as the people that show up for the fucking beach bazaar. It should be noted that the people who grill out here are way more diverse than the bazaar people, ranging from African-Americans, Spanish people from Puerto Rico and South America, the Ukraine and Russia and even a few Italian-Americans.

A lot of the grill areas visitors also brought their own grills, as what looks like about 30 of them got destroyed and were never replaced (even from last summer too). All that are left are ashen stumps.

To compound this offensive slight of an essential park area for citizens, the National Parks Service also decided not to provide the picnic area with ash cans to dump the hot coals in, leading people to dump mounds of smoldering coals and dust to pile up on the few grills left standing. Also noticeable is the lack of garbage cans too.

There is something going on here and it’s appalling. Because what we got here is obvious discrimination and blatant inequity of parks amenities. Because the people that use the grilling area are not going to go to bozo bazaar and waste their money there when they already spend it on their own food and booze that they hauled all the way from Brooklyn and Queens.

Although this was evidently done by vandals, the National Park Service helped destroy this grill area. Classic demolition by neglect. Although by the ways some of these grills look and how many are gone (even by the gazebos), it looked like it was done by malicious force. The tables that were once here have vanished gradually during the years as the amount of tables on the boardwalk gradually grown.

This is a pretty shitty way to distribute public space. In a way, this is similar to the whole “affordable housing” concept of building expensive apts along with lower rental ones for the baseless rationale that poor places can’t exist without rich spaces. The bazaar being the 80% market rate and the grill area being 20% affordable. And the results of where the exclusivity lies is brazenly apparent.

But really what happened? This is the people’s beach right? How could the NPS and even the Riis Park beach bazaar let such discriminatory maltreatment of green space occur. And with the prices they charge for their artisan fast foodie fare and pretentious cocktails which the average person spends about $100 during the day consuming and along with the existence of an idiotic luxury lifestyle campsite, how come none of that money as translated to the upkeep for the grill area? Or even to other area of the park like the baseball field and the nearby handball, tennis and newly painted shuffleboard courts? 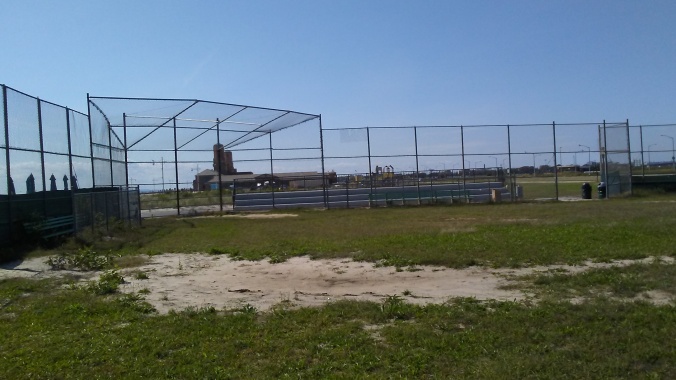 There is something foul afoot with the beach bazaar, which in fact doesn’t even resemble one since real bazaars are dense with concessions and tent stores and games while this is set up in isolated areas far from each other. Another reason for the dubious profitability to justify the existence of this is that the organizers and promoters had their own Brooklyn Night Bazaar kicked out of a catering hall because they couldn’t afford the rent. This is the second time they got kicked out of the borough that they are responsible for gentrifying. Is it possible that the effort by Gothamist to help their Brooklyn transient comrades by writing a wretchedly and laughably pathetic journatisement post on Camp Rockaway didn’t help at all? Apparently not, because the proprietors of CR had to distribute discount coupons (and it looks like they had to skimp a little on the ink at the printers shop too)

But I digress. Actually no all this is relative. The Riis Park Beach Bazaar is a failure and it’s clearly still being enabled. There are obviously some investors behind them that have bigger plans for Riis Park. And it surely involves privatization. Because what the grill area looks like now is ripe for plunder. The grill area is practically barren now and it looks ripe to be usurped for obnoxious commercial promotion events and dickweed startup networking functions.

It doesn’t have to be this way but it’s inevitable, for park privatization is spreading everywhere supposedly because the funding isn’t there to maintain them. And the Riis Park grilling area appears to show that there still isn’t funding for it, although it’s blatantly obvious that it’s being ignored on purpose. Every year gets worse over there, NPS clearly is trying to discourage citizens from using it and presumably their are vested interests to make Riis a luxury destination given the other changes and distressing developments happening on the Rockaway peninsula 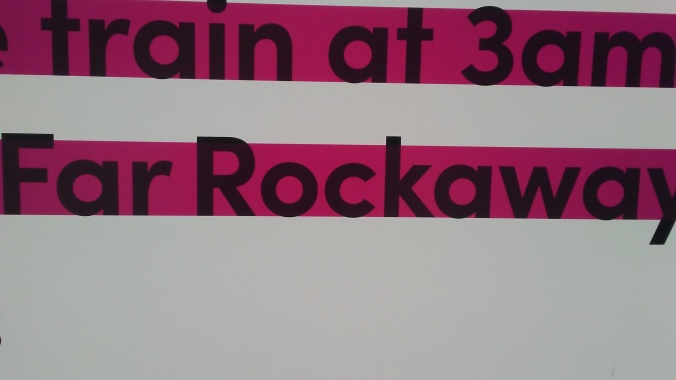 Despite years of warnings and universal scorn from the citizenry of the five boroughs the scourge of gentrification of wanton hyper-development, real estate market speculation/fabrication and the mindless frivolous spending demographic they attract are not going to fade soon and it looks as if it’s going to spread faster instead of gradually now.

And it’s more than certain that is going to happen one of the best summer places in New York City in the borough of Queens (although I think a lot of these newbs think it’s in Brooklyn). For now, I will concede defeat and let the Riis Park picnic go. Which sucks because I love grilling out and I make kickass BBQ burgers. This glorious place was the easiest to get to on bike, despite only a few uphills on the two Cross Bay bridges, it takes less than an hour to get to Riis even while making a stop to get food and Yuenglings at Waldbaums.

But now it’s over. At least writing about it’s slow death is. 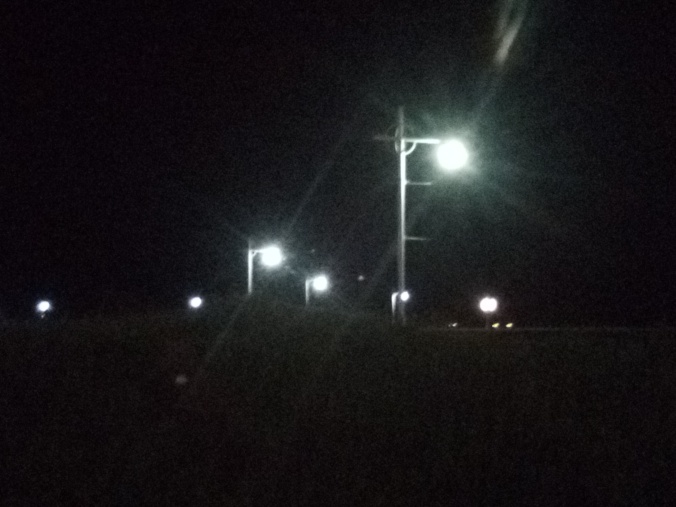 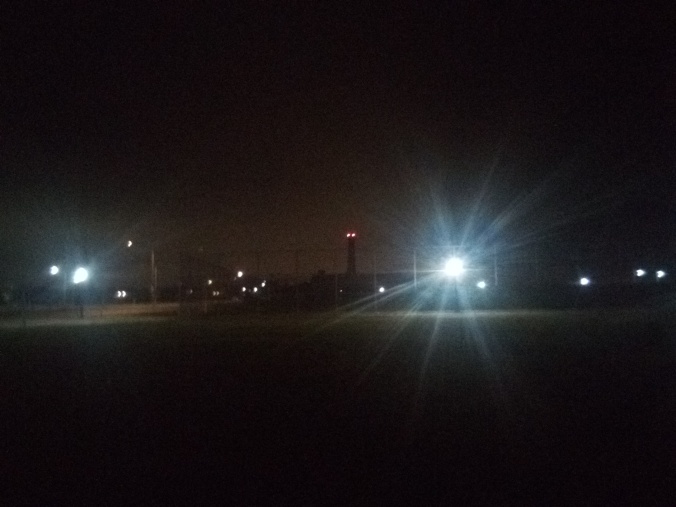 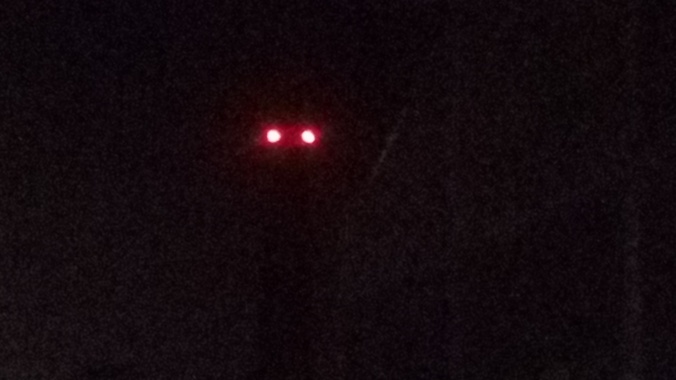 2 thoughts on “Gentrification Of A Beach And Federal Parkland, The Final Chapter: Requiem For A Summer Place”